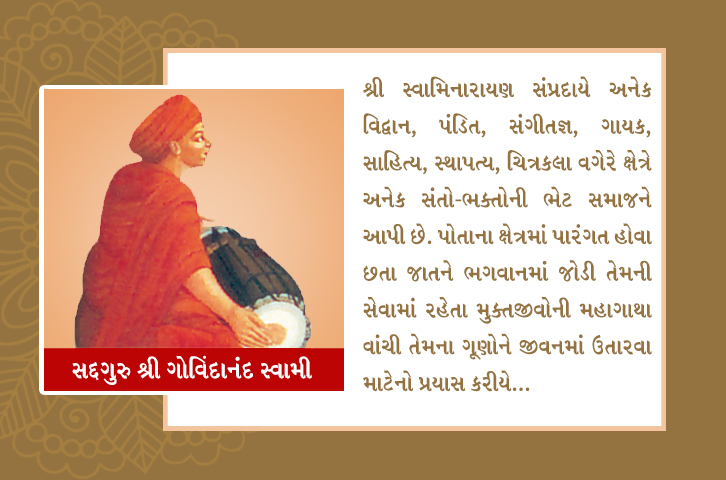 "Govindanand Swami" is considered to be a big name in the saints who received Parabrahman Paramatma just like the Saratata avoiding all the achievements found in the path of abandonment of the leadership of the Vaishvai Ashram and 400 Vairagya Sangh of the Prabhu Milkha, which is an instant fire from Lord Milane.

The goddess of the luxurious Ram Temple, who was in the Rajvada, was doing her aunt Shayan Aarti. Outside the campus seated unfamiliar pilgrims. Instead of talking to Gujarat, Swaminarayan gets the name of Jivan Mukti, where the dome of the temple emerges from the light. Thus, Mahant Shree decided to become a seven-eight-hour masterpiece, whose name is illuminated, it is welfare of the feet.

Mahatai early in the morning, Vaibhav left all the comforts and waited for Gujarat. There, a girl like Apsara came and asked to leave the Kandu. Taya Reya Mahantji put a cloth there, and going on it, I am going to say that it is early in the coming days. There are two brahmins in the morning waiting to be given life in the morning on the fourth day, but do not believe that these are all obstacles of Lord Mila. Then his father-in-law father shut Mahant to prison. However, without bowing down, without breaking the door, breaking the window on the pavement and visiting the fort at night Bhagya and coming to Garhpur and performing darshan of Shriji Maharaj. At the time of darshan, the price of Samadhi was taken. In Samadhi, Maharaj praised his liberalism. At the end, giving the name Govindanand and saying to stay with Anandanand Swamy.

Govinda Nand Swami was a rare Vairagya statue saint. He got a lot of satsang in the surrounding villages in Jaitalpur temple. The self-proclaimed Maharaj was released from Gangabana dal-rice. Koti Koti Vandan at the Sanatna Charan which concerns the self.