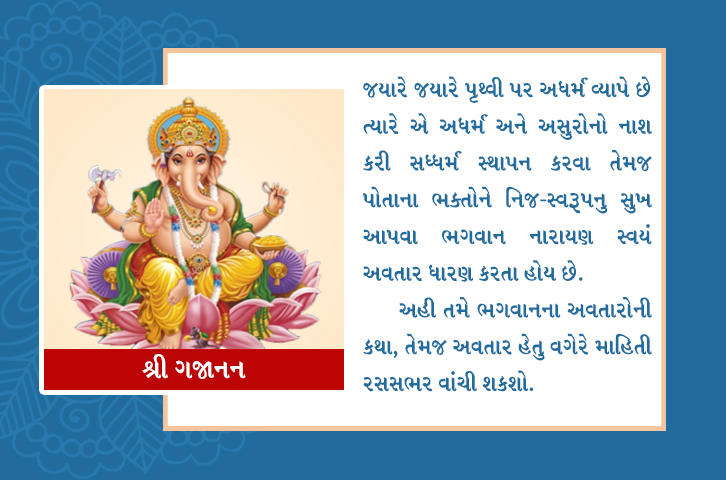 Gyananpati Gajanan Shree Vighna Vinayak Dev is the Mangalitan. There is no rituals in the traditions of Hindu culture that do not worship Ganapatiji first of all. Before committing any work, remembering the name of Ganapatijis name is no obstacle. Ganpati is also a prominent place in Panchayat Devas. In Shikshapatri too, there is a special order of Bhadrava on the Sud-4 darshan.

The narrative of Ganapati birth as per the episode of Kumar Purana of Shiv Purana is entertaining. Once Bholnath was penalized in the caves of Kailash. Then the devotees prayed for Parvati to call it Ogano village. After some time, in a bath, Parvati made an idol of an infant from her husbands self-portrait, and placed a citation in her name. And she named her Vinayak. The devotees prayer served him as a gatekeeper.

In time, Shivaji stopped the penance and returned to Vaynikes door. Shiva chanted Vinayak by insinuating his head. There Parvati came and felt confused. Shiva was sad to realize the reality and the people ordered to bring the head of the species. From the day that elephants head was found, Vinayak Gajanan (elephant-headed) became. The father blessed with this blessing of blessing, that he would be the first worshiper in all your work.

This Gajanan is Shivajis youngest son. His elder brother is Karthik Swami. They have two wives named Riddi-Siddhi. His vehicle is a mouse. The Ganapatiji has also written the depiction of the Mahabharat, which is famous for the Panchmavad. In Satsangijivan, Gajanan has been recognized as the incarnation of Vishnu.

Shree Ganapati Deva is established in every small temples of the sect.