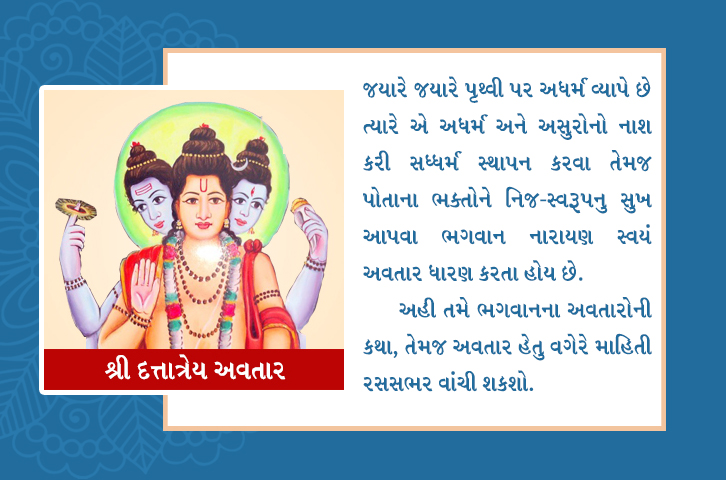 Lord Shivas mother, Anasuya, was blessed with the blessings of Goddess Dattatreya Trivedev in the ashram of Lord Brahma.

Maharishi Atri, according to the Father of the world, was seeking help from Lord Vishnu by harsh persecution for the area of ​​the human world. In the meantime, Brahma Vishnu-Mahesh asked Darshan for giving blessings, and Atri expressed his confusion, why did you do one of the prayers and why did you come? What i want Whom do you want? Tridev said: "We are all three. You want the desired groom. "Atri requested the most unique son of Ratna. The three gods gave them the blessing of being born as a son.

Puran says that to take examinations of Satyamata Anshuya, Tridev went on begging him at the courtyard and made a severe condition of being nude. When Mahasati Nari Anasuya made the bulk of three people on the basis of her religion, she gave a beggar. Brahmani-Parvati and Lakshmiji came to know about this and when they demanded a husband to Anshuya, they resumed.

But going on, Trivede said we had three bulks. He will stay there for you as a child. Thus, the part of Lord Vishnu is the incarnation of Dattatreya Ayonija. Brahmas became part of the Somchandrvanshi kings and were known as Rudra Swaroop Dwarasas of Rudra.

Through the teachings of Lord Dattatreya, Sati Maddalas and his son attained Paramgati. The great empire-rich wealth and science of different weapon roles have been invented by the blessings of Lord Datta by Sahasrangarjun. He made twenty-four (twenty-four) gurus by adopting his attributes from Jad Chetans creation.

Goddess Chiranjeev is different with different views and opinions. His meeting is in Girnar. Syndhas are often darshan.