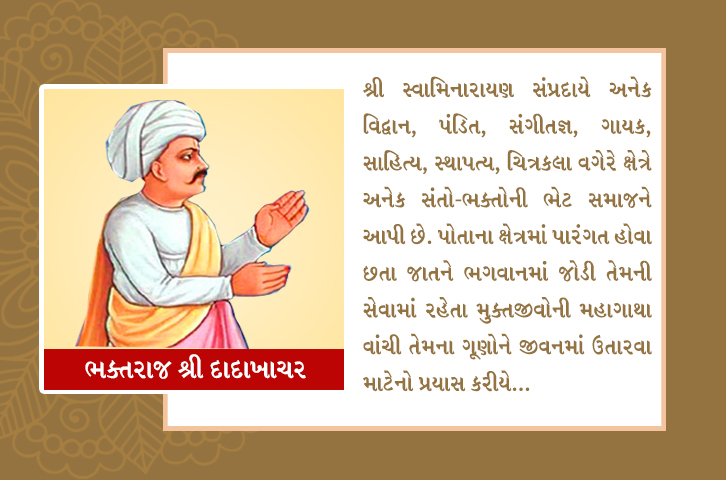 Mr. Dakshitcher was the only clan son of Shri Abhil Bapu in the court of Gadapur. His karmachari was in Gadhpur. VS.N. On the sixth day of 1857, on the sixth day, on the sixth day of the Mother Mon-Prabha, he accepted the possession of Gadhar as Karma land. His name was "Excellent", but in the above days he called them all "grandfathers".

Swaminarayan Gadhda passed the Vasant Vaotsotsav in Varanasi in V. 1886. The family of Abal Bapu welcomed them and not only dedicated homesteads and accepted slavery. Shri Hari also accepted this Gadhda as his residence.

Dadas childhood happens in front of Mr. Hari. He was only five years old when he came to Gadhpur, but Bhakti was superior to Prahlad, so in the unique devotees of Sriharri not only did the British governor, but also in his offices, he was named as Shri Hariña Bhakta. Dada Vitthala is a devotee whose self, Shreeji Maharaj plays and mentions the role of the elder in his education, practice or spiritual practice.

The grandfather went through more than one ordeal and was a staunch sincere and faithful devotee. Shree Hari said, sitting in a pot for going to a pumpkin and roaming around half a hajamate.

His first wife was Kumudbai. Shreeji Maharaj insisted on Dada not having any offspring, he got married again with the "Jasuba" bride of Bhatvadar Nagpal. In the ecclesiastical history, the event remained one and the other. Which became the charioteer of the self in the life of Shreehari Dada Khachar and the renunciers of the family became jaaniya. What is the significance of this event of Sriharri Dada?

There was also a sophisticated person as much as the devotee of Dadas house. According to the History of Gujarat, Bhavnagar was established as an arbitrator to organize the festivities with Jogidas Khuman and Maharajashri Vaje Singh. At the age of twenty-eight, Dada Khachar started a quiet in Hoff Kathiawar in the history. The old struggle of the Rajpiriwal was well solved and the Mumbai government also conceded it. Although, in spite of being an ideal ruler, Dada was a devoted devotee of Dada Kshatriya who lived a life of slaves. Their relinquishment was followed by two children. Bava Khachar and Amara Khachar.

When Sriharri made an honor of Gopinathji Maharaj of the Asso-Sud-1 of 188, Dada said that his land will be cultivated in the 200-bigha land, which is known as Dhadwadi. This Bhaktara had an integral relationship with Shrihari. Gopalanand Swamy was disturbed by the disintegration of Shree Lahiri, but when Shantin was done, Shreehari manifested himself after wearing a rose and wearing a roses of roses, after dedicating it to a self-respecting devotee, in such a way, in the year 1909, in Gadhpur, he renounced the physical body and gave it to Sree Hariri.