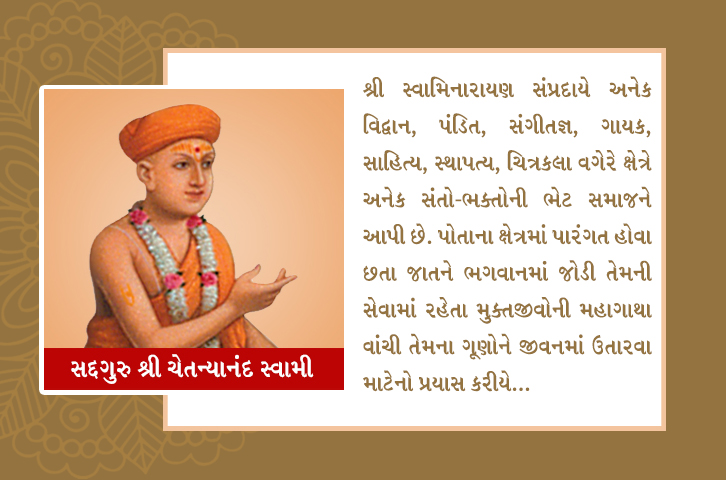 Lord Swaminarayan Samvat in 1858, in the city of Jetpur sit on the throne of his wonderful Aishwarya, he trusted thousands of people and initiated divorced many scholarly scholars and made worshipers of the true Brahmavidyas. One of them, Sadguru Chaitiananand Swami was a resident scholar of Awad state in Uttar Pradesh.

Once he came to Dakor from Tirthaton on the occasion of a pilgrimage to Dwarka with two Brahmins. When he heard the divine power of Shree Lahiri in Dakor, he left for Dwarka. There, running Saurashtra came to the banks of the river Bhadar. At that time, Shrihari was going from Junagadh to Gadhada. Because of the time of pre-Christian times, Shrihari and Santosh-Parsodha sat in front of Shreehii after retiring from bath-worship in river Bhadar. Seeing Aditya, Brahman realized that Swaminarayan should be God.

After seeing the Lord of unexpected Lord, he came to Shrihari with great faith. Sriharri boasted of Gurga Ganga. After listening to the harsh words of Maharaj, three brahmins came to Samadhi. Ramachandra has received Darshan of Srihari in Samadhi. Shri Hari had heard the Gnanapadesh and after seeing Darshan in Samadhi, Lord Hanuman prayed to him for praising God. One of the three Brahmins left the pilgrimage to Dwarka and went to Gadhada with the saints. There, Maharaj gave him a monk and gave a good name to "Chaitiananand Swami".

Chaitiananand Swami was a professor of Sanskrit Studies and a deep scholar of Shastra Purana. Inspired to practice religion, they were very much devoted to practice and to practice satsang. So Maharaj decided to do satsangi to do his darshan.

Shreeji Maharaj, in the village of Adaraj in Dandavya region, during 187 years, while making an oath of Annakut, Muktanand Swami, Nityanand Swami, Brahmanand Swami and Chaitiananand Swami; These four saints were first appointed as Sadguru. Shrihari had arranged for Swami in the Dholera temple.