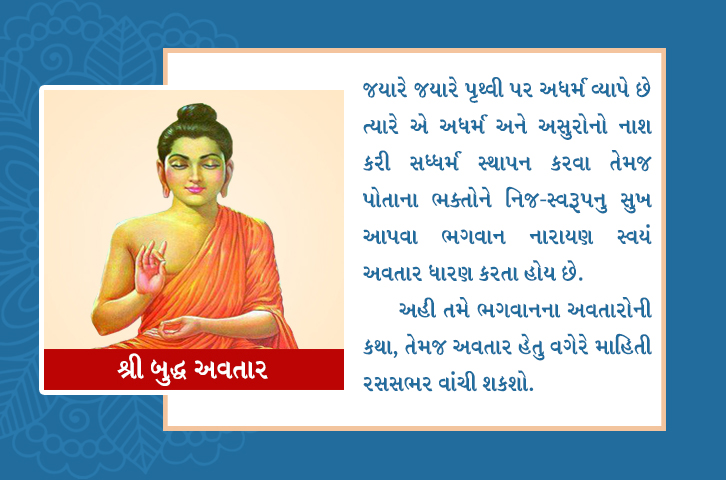 Lord Vishnu worshiped the devotees of Ajin in the village of "Cricut" on the Gaya by worshiping God and the people to liberate the demons and became famous in the name of Buddha.

After thousands of years after Lord Swaminarayans self-indulgence, Lord Buddha embraced the Avatar. His main task was to overcome the sacrifice of the deities who used to take power through the yagna and misuse the power.

Looking at the perspective of history, it is known that once the angels asked Indra that: Our state machinery remains stable, show remedy! Then say Indra, according to the Vedic rituals, do yoga. The angels embarked on the realization of Indras advice. The Vedika hymns of Shakti Upadhya. Success in it has deepened and the states prosperity and the growth of the people have increased, and the pride of the demons has also increased.

We now have the keys to the power of the gods. Who can spoil us now? When the devotees used to use the power to destroy the powers of the divine, the gods praised God with the help of Goddess Kanth. God gave blessings to the gods and he had to put Buddha in order to prove the blessing. God took the Buddawatara and convinced the demons. Siddharam has been abandoned. The power of the deities leaving the yagya ritual is receding. And the people continue to rage. As a result, the state government did not burn, and the gods started to invade the kingdom.

Thus Lord Brahma was assumed to worship the demons through the prayers of the gods.