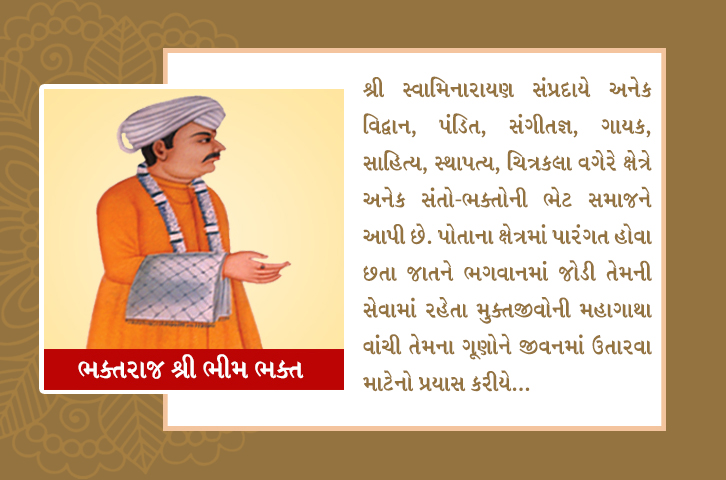 Life of Garya Sampraday is not registered in the life of the devotees who have attained the service of lifelong life and the holy man has been given "Sri Harilila Kamal Bhaskar". But a very exciting event has been written.

At the time of pilgrimage to Garhpur, when Garh-pahr was growing at the time of pilgrimage, the Bhai Bhagat sounded a gun, when the sound of a gun and a smile passed through the ears of Mani. Bhimji took a gun from the hands of Bhagat and tossed him on the stone and threw it out in the forest, but he did not lack Shreeji. The villagers started to worship there by slaughtering them in front of the villagers.

Bhimji did not take food and water without seeing the Bhagat Srihari. There are three-four fastings. One day when the Brahmand Swami was bathing in the ocean, he applied for the Darshan of Swarina to Swami.

In the evening when Brahmanand Swami Maharaj came to Bath in the village of Bhal, Bhim Bhakta came and started shouting like Jayshri Swaminarayan. Seeing this Brahmanand Swami took the shove of Shree Lahiri and took it to the shore and when a big gourd filled with water filled it with a huge gun, Bhim Bhakta was thrown at him like a gun.

Thus, Swamiji pleased Raja Maharaj by playing this three times. In the end, Maharaj Swami and Bhim Bhakt received both of them and came to Darbargadh and told Jivuba to devote the devotee and keep him in service.