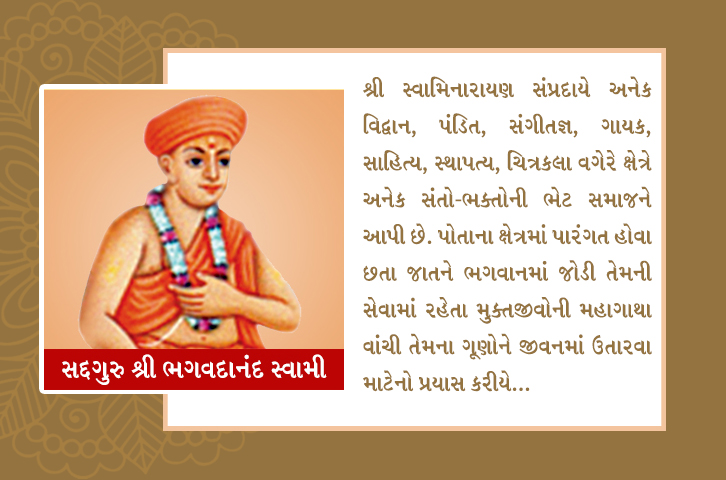 Sadguru Shree Bhagwadanand Swami, who attained the status of the big saints from the small saints on the face of Lord Swaminarayan himself, was the leading disciple of Sadguru Nityanand Swami, a devoted and devoted scholar of devotion to Lord Harivar. Seeing the beauty of their sadness and the beauty of their eyes, Sriharri eyes have been fixed. Despite hearing his name, the pundits remained unacceptable, yet they always took the place of Vachanamrut in the 78th of Gadhada First, due to their conduct in satsang. Although no specific information could be found to be called "Eidmiththam" of his life, but an occasion like his documentary document is written in the pages of history.

VS.N. In 1905, a group of Pandits came together in Ahmedabad, not with curiosity or logic but with hate. If only Swaminarayan Sampradaya is considered non-indigenous then we should be true pundits. Come to the temple and challenge for the scriptures. Unfortunately, there were occasional pundits present at that time with Vidyavavaranya Nityanand Swami Mandal. So the saints were satisfied with all, but Nityanand Munis disciple Bhagwadanand Swami was able to become a guru in the true sense.

He took the pundits mouth cavity from his scientific and scientific reasoning tradition. Bhagwadanand Swami, like Swaminarayan Sampradaya, is a non-indigenous person, he has blown up the horror of the sky like a turtle of the earth, and when Swamy started flaming the questions, the pundits got aghast and kept going with their ear. The Om Swami used to flag the Vedic script of the sect without reaching Gurudev.

Apart from this, there has been another occasion for their sadism. Navari Lal Das has given a blessing during the devise of Shri Hari, that a great devotee will be born there. "On his return, son Ratna was born and named him Kashidas. In Navali, under the influence of the Arya Samaj, Kashidas went to Anjaay and became innocent, but when he got the gift of Bhagwadanand Swami. The Swami asked the Kashidas as a Shree Lahiri based on the classical answer to all the questions related to idol worship. In time, this Kashi Das performed a considerable amount of service to the Acharya Shri Raghuvveerji Maharaj in Navali with the devotees.

Thus, the person who uses his sages for the satsang, is worshiped on the feet of Sankranti Bhagwadanand Swamya, who is praised on the face of Lord Vishnamand Swami.