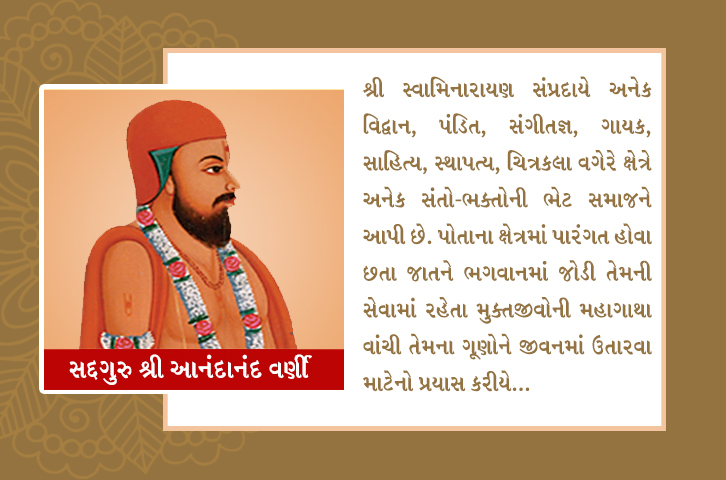 Sadguru Anandanand Brahmachari was born in "Mau" village on the occasion of Maha Sud 5th of Sankranta 185, for the extreme mood of mankind by enduring many miseries with selfless self-indulgence and devotion to Lord Swaminarayan. Ramanand Swami, on the blackness of Karunnas blue bishar bhai and blessed him that he would take a sankad named "Sanandan on your forehead".

It is true that todays rishty came true and Dalsukh Ram was born. Becharbhai donated sons jewelery to the Brahmins by sacrificing his sons ritual karmic ceremony. At the age of eight, Bytech Pancholi, after giving a holy ritual, gave him a scholarship. Because of the sacrificial rituals of the East, love was inherent in God and there was nirvana from worldly life.

Dasasuk Rams Mama Jagannath who was given the name of Mukundanand Varni by Ramanand Swami. After this event, the memory of Shriji Maharaj began to become intact in Bhanja Dulasukharam.

Once upon a time, Dalsukh was playing under the head of Mamas village Maawiv. Then Maharaj went through the palanquin of the village. Maharaj called Dalsukh and said that the hunger was hungry so tell Rangafu to bring a meal.

Ten years old Dalusukh made a meal and prepared Shreeji Maharaj and other devotees with a true heart and saved the statue of Lord Maharaj at a distance. Dalsukh Maharaj says: Lord! Now I take my hand and I surrender you. Maharaj said, take the parents leave, then they went to the village of Dalsukh Maau and took a leave of their parents and took them home in 1864 and went to Gadhde. Maharaj Dulukk Rama gave the initiation of Tyagi and named it "Anandanand Vrine". After the initiation, Anandanand Varna joined Mama Mulji Brahmachari in the service of Shriji Maharaj.

At the temple of Ahmedabad, he served as a priest of Naranayana Deva for seven years and stayed with Gunatitanand Swami for twelve years. After that, Junagadhs water did not come in the way, then the next life was spent in Gadhapur. In the Mahapooja, Ananda Narada Vrani has been addressed as saying that Yugurevada was assumed.

In the footsteps of Sadguru Anandanand Varni, who spread the love of love in the heart of Nirmal Nayana, who received Gods approval of his selfless brahmacharya, Prasham.