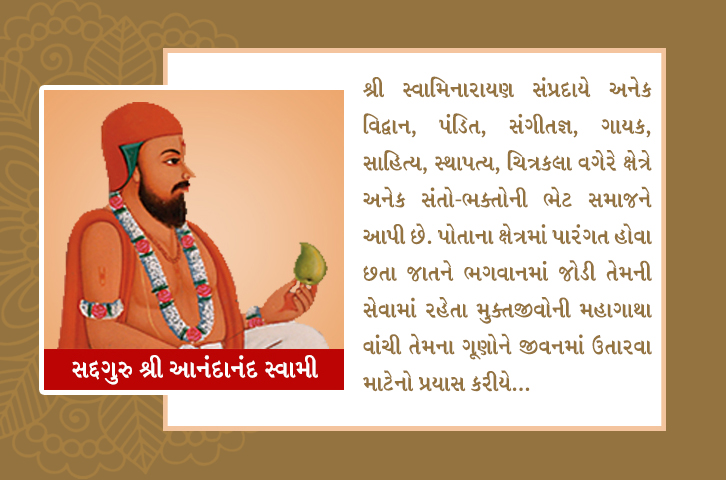 Devagya-vairagya and Ishtihnishtha, the brightly-skinned, bright-sainted Sadguru Shri Anandanand Swami also had a prominent place in the classical saints of the sect. He was the ruler of Bharatpur. His name was Amarsinhji. One day, Rajpura Amarsinghji reached the city of Ayodhya to receive spiritual powers by giving royal authority to Ranjit Singh.

Even after receiving the achievement of Ramdola Ashram from Ayodhyas famous prosperous Ramgalla Ashram, the distance of this mahatma from Amar Singh to Lakshmandas remained unsettling. After one day Mangala Aarti decided to go to Dwarkas pilgrimage. Five disciples walked elephants, ghosts, camels, dera, Tambu from Rajthatha to Mahantji yatra. His distance was eager to meet Avinashi. Reaching the threshold of Dwarka:

Its shelter, which is found, is in its place of work.

Laxmanasasji, listening to Ramnand Swamis yashagata, took a look. Ramanand Swamis darshan brought him to the lodge ashram. At the end of the five days, the followers of Aththa Dwarka were said to be disciples and they themselves became Anandanand Swami by taking initiation with Ramanand Swami.

Having lodge, learning about oshang yoga, being priceless, was a practical skill. There was an extravagant interest in Sri Lahiris spirit too. The Chief Administrator of Sriharri, every major festival, Samaiya, made him the same. Being very proficient in decorating himself, he was pleased by the decoration of Shrihari in big festivals.

Sriharri decided to build the temple and built the first temple under the supervision of Swaminarayan Swam in Ahmedabad. Apart from this, the temples were built by Swami in Bharuch and Jaitalpur too. The last time spent in Jaitalpur Shadowed in many festive places.

Vandan, in the footstep of Saint Thakur Das Anandanand Swamy, who dedicated himself to the life of the Sampradaya in the development of the lifelong sect, gave a rare opportunity to meet the aspirant of the famous Vaibhavi Ashram, such as Bharatpur Raj Bhawan and Ramgalla of Ayodhya.