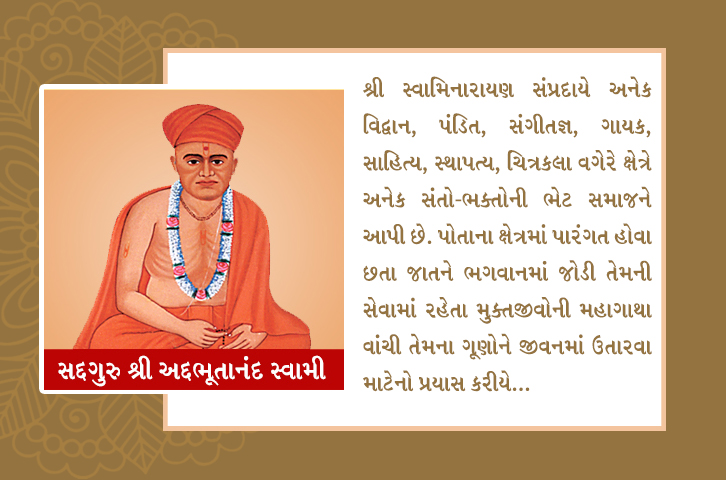 It was a simple, simple and complete devotion to the life of Shri Adhyanand Swami, who came to the conclusion of Vairaji, renunciation, sce and sadhanaervi. A rare event in his life is written in Suvarna Kali in the pages of the history of the sect. And it is a matter of fact that with a tiny sword of Vairavyavag, one of the jagans of the Tigers crossed the bundle of the world and took a beggar in a handful of arms and reached Shreeji Maharaj.

Childhood name of such a great monk was Kalyandas. Father Sangha Patel was born in the village of Kadu, near the writing of Surendranagar district of Saurashtra, by mother Devubais wife. Swamishri was away from the subject matter since childhood. He was also miserable in the beautiful worldly life. From the powerful Vantha of Alikh, Lord Swaminarayan became the custodian of Sadguru Shri Ramanand Swami in Kariyan in Swami Samvat 18. Every day, the Moon of the Shukla Party increases the moonlight of their devotion. The love of love spreads away, from the bhavadaditar objects, the mind gradually fell back, but after age it became ready to go. Shreeji Maharajs paper came to Mama Aja Patel while Sara had been traveling with Saptapadi sources.

18-18 Satsang mangatsa worldly life stops happiness and goes to meet Mohan. When the word "ehsarv" came in itself, it was believed that after leaving this Kalyanandas, he came to visit the Lord Shrihari, who was about to leave the world. Shreeji Maharaj was very much pleased. Calling upon himself, he left his hand with Kalyanandas hands and said, "You have done wonderful work; So your name is Adaptanand Swami.

Despite the sadness of the lord after the saint, Lord Prabhu continued to think about the merits of the seekers. Swamishri, with the help of Nishkulanand Swamiji, whose names are taken in the name of Vairagya, is left with the respect of Swamishri, the home and the world. In the Khandhans, when devoted to satsang, the devotees of Kumbhari, the ruler of Kumbhari, who came to know the attainment of Satsang and the Brahman ascendant, decided to give their two girls and some state lord. On this occasion, even in the gloom of Maya, the glory of the ascetic power of the Swamy is found. Swami spent the night leaving the Rajdarbar, Rajkanya and Vaibhav and escaped from there secretly.

In spite of being the masterpiece of such a Vairagya, Swamy has laid sidewalks of satsang in many villages like Vatsa Nandod States Bhadam, Kandari, Varmadi, Choranda, popularly known as Patidar village. Not only that, but for decades, the Mahantapada of the Dholera temple has been well served. Nearly Shri Hari Swamdham Gamanbad, the biggest umbrella of Aatsang has been found by Aashantanand Swamy.

When Acharya Shri Bhagwat Prasadji Maharaj made a dignified affair with Lord Swaminarayan in the year 1924, he had mentioned that "Acharyaaday" is in the Granth. Not only that, in the year 1913, Acharya Shri Vihari Lalji Maharaj came to the throne. Even when Swamishri was overwhelming, he started satsang with them and V.V.1939 Kartik Sud-14 on Nandasantan, the longest of these satsangs were given happiness and were present in the service of Shreeji.