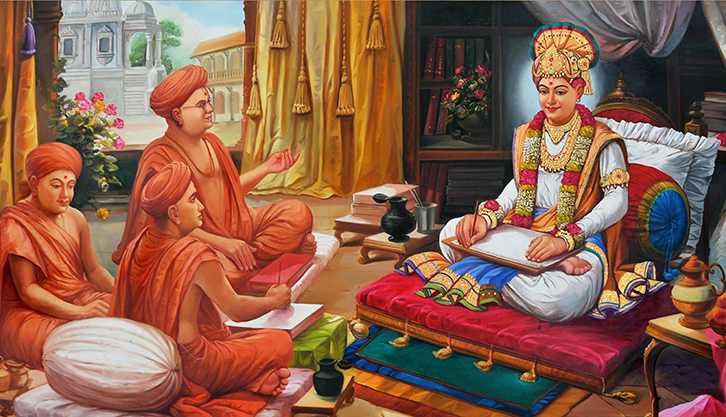 Bhagwan Shree Swaminarayan established unique Acharyaship at Vadtal. Then He visited the beautiful city of Vadodara at the invitation of H.H. Shrimant Sayajirao-II, the ruler of Vadodara state. After three days of public, private and royal felicitations Shree Hari returned to Vadtal, the hub of Swaminarayan Dispensation. He sent the saints in all directions to preach true religion to people.

For about 70 days he listened to the tenth and fifth chapters of Shrimad Bhagawat – the first scripture containing the divine life of Bhagwan Shree Krishna and the other one dealing with Yoga techniques, from Prayagjit, a great scholar. He would listen privately and then would expound the same at religious congregations. Shree Hari had great fascination for these two chapters which are included among Sat-Shastras-scriptures authorized and favoured by Him.

In V.S. 1882, on Vasant Panchami, the festival of Spring was celebrated with great zeal and zest among the followers. Later on in the evening when He was left alone, He decided to write the divine codes of conduct for all His followers. He said to Himself: ‘Through these codes (1) People may know what true religion is, (2) People may follow true religion, (3) People may realize the ultimate goal of spiritual liberation, through true devotion, (4) People may follow My words of wisdom and know My true aim clearly, (5) People may dispel all their doubts about true religion, (6) People may achieve bliss here and hereinafter, (7) People may get My support, succour and guidance even when I am not physically present among them, and (8) My words of wisdom in terms of these codes of conduct may be identified with Myself.

With such divine motives, He asked Sukhanand Swami to bring pen, ink-stand and papers. He then started composing His message in the metre known as Anushtup Chhanda which can be sung in 32 Indian Classical melodies (Raga). These immortal and universal codes were the essence of all holy scriptures like butter churned out of curds; like the cosmos within an atom!

Before commencing to write, He placed the wooden board on His right thigh, held the paper with His left hand and holding the pen in His right hand He started writing Shikshapatri – His divine immortal message. (He started composing the verses on the 11th day of the dark half of the Hindu month of Kartik in V.S. 1882 and completed the same on Vasant Panchami – the festival day of Spring – on the fifth day of the bright half of the Hindu month of Magha.)

Shikshapatri is the most authoritative Gospel of the original, supreme Dispensation of Bhagwan Shree Swaminarayan.

But how can we blame the mirror if the blind cannot see objects therein?

Why has Shree Hari named His divine immortal message as Shikshapatri?

The word ‘Shiksha’ has many meanings but taking into consideration the content of this book the word means Gospel. The word ‘Patri’ means writing. (Ref: Apte’s Sanskrit Dictionary) So, Shikshapatri means Gospel written by God Supreme – Shree Sahajanand Swami Himself. Being a DIVINE MESSAGE, unlike in other holy books the verbs are mostly in the potential tense and not in the form of orders or commands.

Shikshapatri is the shortest Gospel in the world (only 212 couplets!), very easy to understand and equally easy to follow. The followers are advised to respect all faiths, all religious places and all religious objects. It is free from bigotry and fanaticism. It presents a universal, eternal code of conduct for gaining true happiness in life and to get permanent spiritual redemption after death in Akshardham – The Divine Residence of God. It is divided into universal code of ethics for all to follow and then it shows duties of householders, saints, women, religious heads (Acharyas) etc.

If any person follows these basic, universal codes of conduct written in Shikshapatri, he will achieve maximum happiness, health and long life, together with prosperity in this world and will remain permanently with God, after his death.

So, dear reader, read, study and recite Shikshapatri daily and be assured of achieving all that is worth achieving in this life