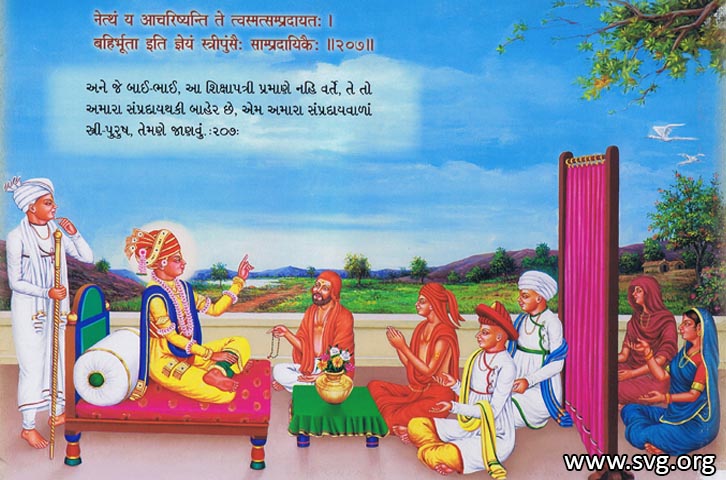 Manusmruti explains, ‘A woman, even though a Pativrata (devoted to her husband) or endowed with righteous qualities can degrade in the company of men.’ Having discussed this Shloka with saints, it is also the case that if a woman’s looks or actions cause a man to develop lustful tendencies then the woman can be held to blame to some degree and therefore the directive of not showing her face to other men is also to save primarily the Acharya-Patni from downfall, but also to prevent men from such tendencies.

The Acharya-Patni here is an example to us all, highlighting the great sacrifice she makes and showing the strict segregation laws that apply in our Sampraday.Sarvavtari Bhagwan Shree Swaminarayan Himself wrote the pious ‘Shiksha Patri’ which is like Sudarshan Chakra and offered it to the devotees. There are many directions about humanity and compassion towards all living beings of this universe.

In fact essence of about 350 scriptures has been written in it and each of these directions is very important for human life. In Shloka-63 of ‘Shiksha Patri’ it is written, “All my disciples shall go to temple everyday in the evening and there, they shall sing loudly, songs in praise of name of Bhagwan.”

In the stories narrated in the scriptures and Puranas, it has been clearly stated that, “If a Jeev does not perform Sandhya Karma or Kirtan-aarti Darshan of Bhagwan at Sandhya time, he loses the divinity and becomes demonic. The evening time is dominated by Nishachar Jeevas and such demonic elements enter in the human mind and change him into demonic.

With the sun-set, the negative elements become more powerful upon the earth due to spread of negative energy in the evening. Such a time is of one hour. There are umpteen number of examples in the scriptures which narrate that, many saints and Rishis- Munis have fallen prey to demonic powers by not performing pooja, darshan and kirtan in the evening.

The power of Nishachars is very dangerous and it has defeated many great persons in no time. During the Sandhya time, human mind turns towards demonic thoughts and becomes thought-less. Manthara of ‘Ramayan’ and Rishi Kashyap and Diti of ‘Bhagwat’ caused the birth of demon like Hiranyaksh as they missed to perform Sandhya Karma in the evening.

In any temple of any religion or sect of this world, Sandhya aarti is surely being performed though such aarti-pooja may not have been performed during the daytime. Therefore, as per our tradition, dev-pooja, aarti, kirtan etc. are performed in the temple to reduce the impact of the demonic power and lamps are lit everyday in the houses of all the devotees.

There is much difference between a house and a temple. The middle option can be explored only when there is no temple in a village and many devotees are residing in the village. If distance of going to a such a place is half an hour is away and dhoon-kirtans can be performed while singing loudly, Griha-Aarti is approved or if invocation of idol image is performed in Chal- Swaroop in Vedic tradition, it is approved.

One should chant name of Bhagwan Shree Krishna, Who is Pati of Radhika, with all attention and concentration. It has been stated in ‘Shrimad Bhagwat’ that, Kaliyuga is a mine of Doshas; however there is only one quality i.e. chanting the name of Shri Krishna and by performing Kirtan of Bhagwan one can obtain emancipation.

Dhyan should not be performed during Sandhya time; rather chanting the name of Bhagwan and Kirtan should be performed singing loudly. From the time of Ramanand Swami, ‘Ramkrishna Govind, Jay Jay Govind’ is being sung in loud voice after Sandhya aarti in the evening.

In ‘Brihad Narad Purana’ it is stated that, “Kaliyuga cannot compel the people to come under its impact, who perform Naam- Kirtan of Hari, Govind, Narayan, Keshav, asudev, Narayan Krishna etc.” In ‘Narad Panch Ratra’ it is stated that, “Naam-Sankirtan should be performed by Haribhaktas and ladies devotees in the Sabha of Haribhaktas and ladies devotees, respectively.”

Those who perform Sandhya-Aarti Darshan automatically get the result of performing five aarties. During Sandhya aarti, Ramkrishnagovind Ashtak, Navinjimut Samanvarna Ashtak, Nirvikalp Stuti and Janmya Kaushal Stuti should be sung invariably. Because by performing Nirvikalp Stuti by Premanand Swami, one gets Prayaschit of any bona fide mistake committed during Ekadashi Niyam.

Therefore, all the devotees should relieve themselves from all of their daily chores and should perform Darshan of Sandhya-Aarti. If this is missed out, demonic elements of the world would enter in us permanently. As per Vachan of Shree Hari, Sandhya of even one day should not be missed. People know very well to give priority to important works.

Then also, there is no other option to preserve divinity. In this Modern Age, the houses of the people who watch TV Channels everyday in the evening, are filled up with all types of demonic elements. Just as a devout Muslim does not miss his one time Namaj (Prayer-time), an ardent Satsangi devotee should not miss his Sandhya Aarti. Sometimes, if we are outside temple or our house in some critical time, we should perform Aarti-Gaan for five minutes with all concentration and our daily routine of Sandhya-aarti should be maintained.

The positive energy which is generated through Kirtan performed during Sandhya-aarti destroys the negative energy. Shree Hari has insisted upon that all devotees must go to temple of Bhagwan everyday during Sandhya time. The devotees get their desires fulfilled, by performing Sandhya-aarti Darshan and get emancipation by getting absolved of all sings. Even the echoes of the bell rung in the temples shake away the demonic elements.