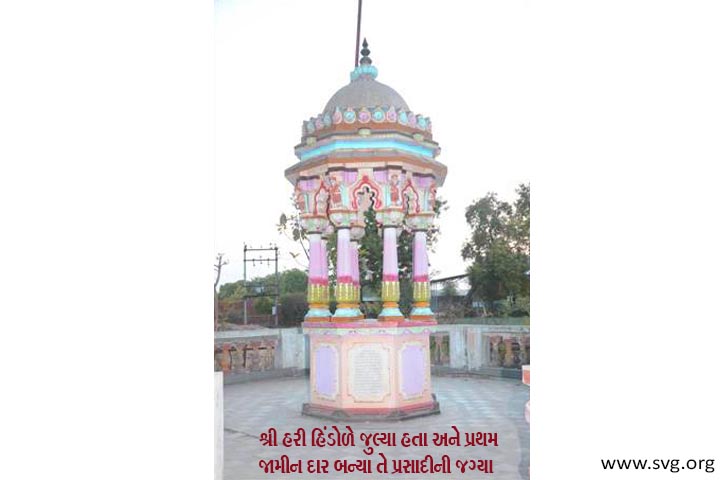 When it comes the month of Ashadh, there starts thundering of the clouds in the sky, there is rain everywhere followed by lush-green greenery everywhere, what is remembered by a Bhakta of Bhagwan? Certainly Bhagwan and devotees offer beautiful Hindola to Bhagwan.

Such a nice feeling was once Jetalpur.devotee Aasjibhai and other devotees of Jetalpur thought about organising a grand Yagna and offering Hindola to Thakorji. Devotees started all preparations for implementing this divine thought. There was a banyan tree in Vadi.

So strings were tied at one branch of the banyan tree. When the feelings are noble, everything happens in a grand way. All devotees prepared a very beautiful Hindola. A golden Kalash was placed at the top of Hindola. It was decorated with silky beautiful cushion and other decorative material.

Haribhaktas had also brought umpteen number of garlands of various types of flowers. There were so many garlands brought by the devotees that, it was not possible to wear all the garlands and so some garlands were held at the top of the stick held in the hand by Shreeji Maharaj.

Many other garlands were offered upon Hindola and some other garlands were accepted by Shreeji Maharaj Himself. Thereafter, Anandanand Swami stood up and started swinging the Hindola. Somla Khachar and Sura Khachar were standing near Hindola holding Chamar in their hands. Other devotees started singing kirtan accompanied by musical instruments.

There was Puspa-vristi from the sky and devotees were singing Kirtan loudly with utmost devotion in their heart. Garlands of Prasadi were offered to devotees by two of the saints. Dear friends! Such a beautiful and wonderful Hindola Darshan is being organized even today in our temples so never miss to perform divine Darshan of this Hindola.