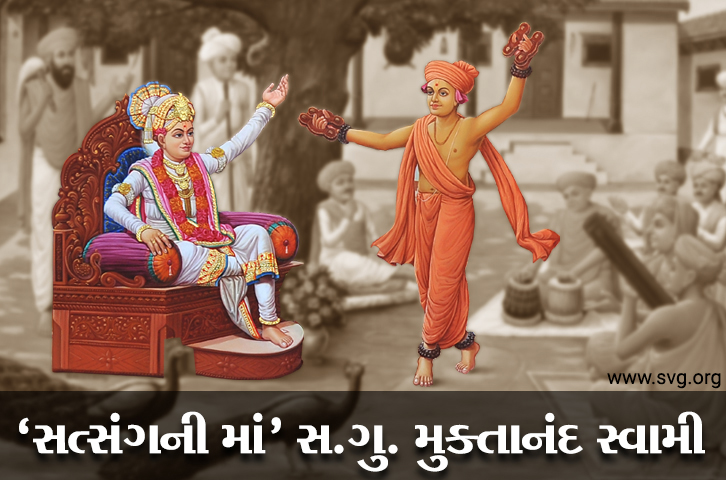 Shree Swaminarayan Lord Swaran, 500-500 Paramahansamsara marya and satsangarupa building promenade and Satsangs mother saint, who has got the title of Satguru Shrimuktanandaswami Swamishri was born in the year 1814, on the day of Samastam, in the city of Amrapur, Lord Rama was born on the feet of Lord Vishap, Anandram. His childhood name was ridiculous. Amreli and Amrapur were their karmites. In childhood only the family has a glimpse of the polemicity. And the father got the knowledge of Sanskar, Sanskrit, Music and Tulsi literature only.

The study of Vedanta, the dissolution of the worldly life, the discovery of a guru, and the search of a guru etc. are the ideal of Mukta Kumar. Muktudhasan was born as a disciple of Sriramandanswami, the founder of Uddhav Sect of Vasant Panchami in the year 1842 and became known as "Muktanand Swami". It is the triennial of the form, the virtue and the beauty of the Self. Thats why he became the leader of the Lodge Ashram. With the command of Gurudev, Bhuj went to Bhuj and studied Vedanta again. As a result, Gnan and Garima have been received. MuktanandSwami, who knew more than one language, had a unique power of strength. And in their lips there was a cigarette nest, which was delicate. Mann was not a big thing to spell the audience by engaging him with ragas.

His Awadhamavyavaya gave him a unique respect in the hearts of thousands of people. Shortly afterwards, the followers of Ramanand Swami came forward as presidents and future devotees. At that time, Neelkanthnaru 5 came to Shri Swaminarayan Lord in the Lodge Ashram on the sixth day of Shravan Shravan. And Shri Ram, who was influenced by Shuddhashudhi with the purity and behavior of Sadashiv Shuddhi and Shree Swaminarayan, remained in the Ashram for a long time. He met Ramanand Swami at the time, took his initiation and sat on the throne in Jatpur. It was Muktaanand Swami who was the direct successor of Ramanand Swami, the happiest of the matter. This is the biggest proof of his retirement.

Ah! What kind of creature! What a hell! Prakrut Purushottam in his heart! So that price was also getting even in his poetry. "I am so much nervous, even if you are ..." Such a thing is written by saying that he has set an example of cowardice; Not only that, but in view of sectarianism, many languages ​​have been provided in various languages, classical dance that will make Gwalior singers aroused, with the interest of Rasulila, such as Panditia, Raasilila, which can defeat Brahmasutra Bhasha in one persons life and defeat the Pandits in Vadodara alone. If you have registered in somebodys name in history, it is the only liberated self M.

There are 34 texts written by him. His Lords garland has given glory to the exploitation of India. Sriharri gave gurupada due to his talent with his humility and his greatness with knowledge. Pratat Menotam had kept the limits of accepting him as a guru for the rest of his life. Due to Vatsalya and Karuna, Lord Shree Swaminarayan himself gave him the title of "Mother of Satsang". Reflecting on the virtue of Swamiji, Shree Hari Shree says in Hindi, 8/14, "He keeps on increasing the quality of Mahatmya day by day." He is a member of His glory, so that he is a great friend of all the saints who are in our satsang. Do not keep a new-minded price in someone. Their nature is like a natural child.

He also wants a favor to keep an eye on himself. Everyone loves to love and keeps the rules we give to our form. Despite such qualities, they do not have any respect for the mind. So, we have a lot of interest in the lord. "After attaining such virtues, Muktanand Swami Shriharri went into self-interest only after only one and a half months. But due to their virtues, they are always immortal in satsangs and all their lives. The great saints have brought together the idol of the great idol worshiper Muktanand Swami to give their best talents to their virtues. Today He prayed in his Charan at the pious place of Swami, that we should cultivate the qualities of such beauty like him and could please the devotees and the devotees.