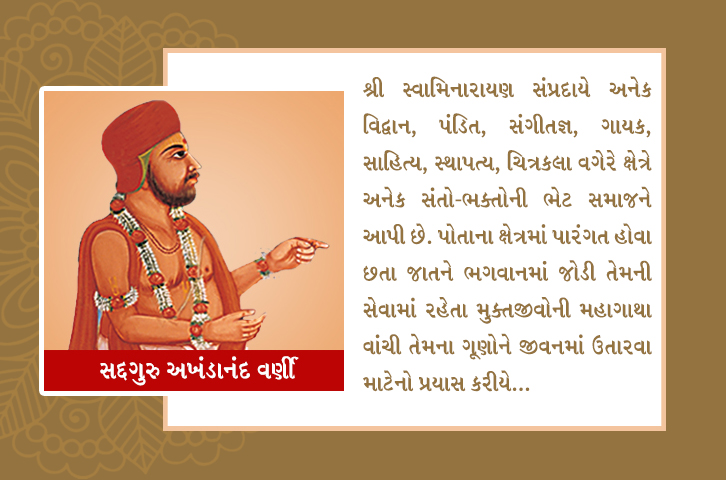 Akhanda Nandwari was Shivarram Bhatt of Sasiani village of Muladi taluka. His fathers name was Ratnasharma. Ratnasharma was a learned scholar of the Vedas and the scriptures. Shivram Bhatt had studied Javed and Shastras by staying with his father.

He was a priest of Rajkul in Limdi State, getting a good year from the state. They also tried to narrate the story of Shrimadbhagavat Puran.

When Shree Swaminarayan Sampradaya spread, his devotees called him Parabrahman. When the villagers called Jantar Mantar Cameli and Pankhi too. But Shivram Bhatt got the chance of satsang after applying the saints. In this case, King of Lymadi Harisinhji also heard the words of Aishwarya of the supernatural power of Lord Shree Swaminarayan. Some vicious conversations have been made by the villagers, so Raja sent Shivrambhat to Gandhapur to confirm that he had come to Shreeji Maharaj.

Shivram Bhatt was a Rajpura king of Harisinh, for him to have lessons, prayers, pilgrimage. Shivram Bhatt went to Shreeji Maharajs place of pilgrimage after the insistence of Raja in the court of the kingdom. Both the king and the queen came there to worship the book and worship Vyasa. That is why Bhatti said softly that Rajasaheb worshiped you alone. There is a touch of laughter. After the dependence of Swaminarayan, my rule is. When the king insisted on worshiping him, Bhattji did not accept it and said that worshiping the sangad should be worshiped with another Brahmin.

That is why, from the pulse, Shivraj Bhatt walked out. Such a worship and devotion to Shreeji Maharaj was strong. Though he was in the worldly life, he did not chit in the worldly life. He left the worldly life and kept on serving at the feet of Shri Lahiri. That is why he was replaced by Charan Kamal of Sarvanangal in the temple of Sriharri. Shreeji Maharaj came to Varanasi after taking initiation. Accepting the name of Akhandanand Varna, enjoying the enjoyment of Bhagavatswaram, the intense bliss is fulfilled.

Since Akhtarand is a learned scholar, he has done many services in the literature of the community. Shreeji Maharaj created many texts and hymns filled with greenery and Mahapooja Vidhi is also a new customary worship ceremony in the tradition taken from Akhtarand Varna, a non-fictional "Sree Charicharitra" script. The Mahapooja Akhandanand Brahmachari and Yogivivarya Gopalanand Swami started the work in Jantapur and also in Junagadh.

When Shree Hari founded two Acharya in Vartal, he told Sadguru Shree Akhandanwarwari to live with Yavat Jivan Acharyashree Raghubirji Maharaj. In the Siberian Charitra, the word Suman is praised by the word Akhandanand Vrani.

"Mahatma, who was a mine of virtues of Shri Akhandanand Varna. Those who were considered to be the best in the Rudy-intellectuals of the Gnani Purushas, ​​they were instinctively calm, slow and lenient. There was a devotion in the worship of Aksharadhipati Purushottam. He had many talents due to Chatur and Vairagya to understand the common people. He had a rage to listen to Lord Shriharis character. In this world, they were at the peak of samadhi. The best of the virtues, they understood the true mastery of Shrihari on the character male. It was also understood by the grace of Shri Lahiri. "

Such is the goddess of such a goddess of Shririyri beads, like the beads of Akhandanand Varni on the feet of Koti Coti Vandan.