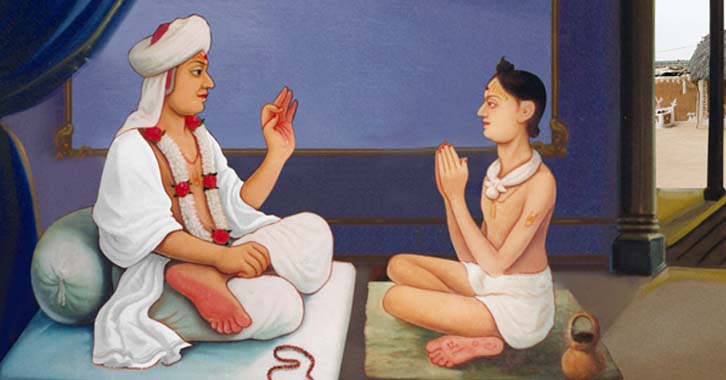 Ramsharma’s parents were proper devotees of Shree Krishna. In young age, Ramsharma was full of Dharm, Gyan and Vairagya. As he grew older, he got the strength to get himself detached to the family ties. He left home at a very young age and started his pilgrimage in search of a Guru inorder to have darshan of Lord Krishna. He met Atmanand Swami who initiated him and called him ramanand Swami.

Atmanand Swami believed in formless (God is light only). ramanand Swami could not bear this and left his guru. He walked down South of India and came to Shrirang. He studied Ramanujacharays holy books and became a devoted disciple. Ramanujacharya gave ramanand Swami his divine vision in trance where he had the darshan of Lord Supreme. He started preaching about Bhakti, Dharam, Gyan and Varagya. Devotees of Ramanujacharya did not like this so ramanand Swami had to leave. He walked to the north and came to Vrandavan. Here he continued his preaching. Lord Krishna gave him Divya (Devine) darshan and reminded him that he was Uddhavji in his previous life and that he should now spread the knowledge that he has passed to him. Lord Krishna initiated him again and he started a separate sampraday called Uddhav sampraday from Ramanujacharya but following the same tenants of Ramanujacharya Sampraday.

After a couple of months, ramanand Swami knew he had to leave this world. He called all his disciples at Faneni town and instructed everyone “you have been obeying me, I am Uddhavji Avtar but this Shree Sahajanand Swami is the Supreme god, Purna Purshottam Narayan himself. You should now serve him obediently and give single minded devotion if you wish to acquire ultimate salvation. My work is now over.”

There was a big festival and on the 12th day ramanand Swami gave food to many saints and Brahmins. On 13th day in the morning ramanand Swami took a bath in Chacha River and sat in the temple doing meditation and left this world chanting Lord Swaminarayan’s name. He left this world on 13th day of Magshar Sud Thursday 1858 (17-12-1801AD) thus released from Durvasha’s curse.

Shree Sahajanand Swami and the followers performed death rites of the Guru till the 13th day.

We all follow rituals and manner in which they are performed as per Ramananand Swami i.e. Ramanujacharya . Also Shikshapatri instructs us to do this.

ramanand Swami had powers to put his devotees in Samadhi and give them vision of Lord Supreme.