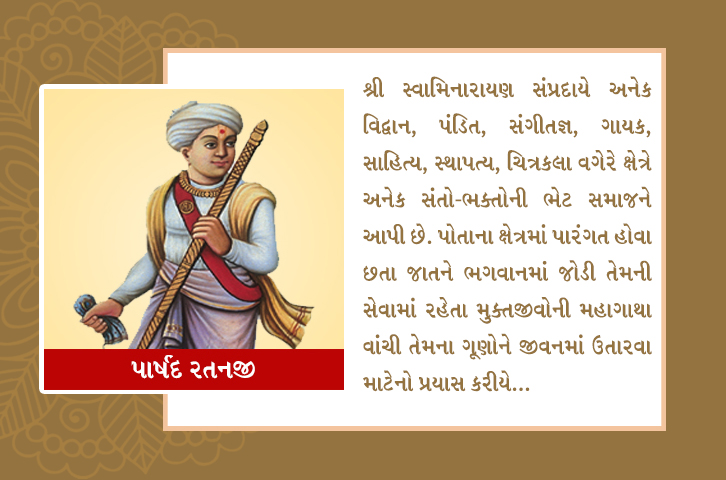 "Devotional worship is done by some like Ratanji and Meiyag, but not everyone can be respected."

From Shreeji Maharajs mouthpiece, the words of praise came about, he was a native of Ratanji Bhai Savarkundla. Who invented his life service provider. Such generous, architectural scholar Ratanji was the bodyguard of Shreeji Maharaj. In the age of life, he became a devotee of devotion, and the Gnan Vidhi became enormous and Lords grace descended on him. His love for God rose from devotion filled his entire life and Shreeji Maharaj became the ruler of the world. Shreeji Maharajs command, according to the order of Shreeji Maharshi, literally obeys the order of rain falling into the Swati constellation.

Once the nations Satsangs came to see Garhpur, when they were ready to go, Maharaj said to Ratanji, "Go to get to the front of the village. Standing in the middle of the footsteps. By saying Saru Maharaj, Ratanji walked with Haribhak, and he got divorced and finally called Jai Swaminarayan. Harbhakas walked and Ratan ji stood there and turned the beads. Even though the shaun did not move from there. At the evening meeting, when Maharaj asked, "Why do not you see Ratanji? Then the second parshar says that he did not come after attacking the devotees. After that, two pilgrims went to investigate Sriharris orders, then Bhagol brought the standing of the standing wreath and called for calling.

Shree Maharaj said why Ratanji was standing there. Maharaj was your command that if he stood up, he would stand up. Maharaj laughed and laughed at the flowers of praise and said, "What is Ratanjis promise?"

Rattanji was in a fight for a turbulent vote. Ratanjis arm was cut off in a terrible battle. He was very brave himself and took great pleasure in serving Maharaj.

It is very important that you do not have to worry about.