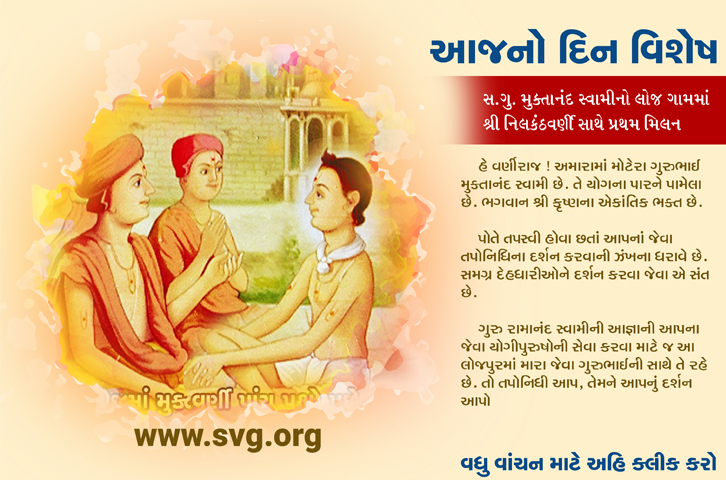 The Last session of the ertth mission of the lord Nilkanth is loj. From mangrol Lord Nilkanth come to loj on 21th August 1799. After taking bath, He sat on the slab of the step-well and started. His mental worship (manshi pooja).  The women folk who had come to fetch water from the well were attracted towards his vright face anf took.Him to be the adept from the  Himalaya. They were moved to see the heavy penance of yogi at such a young age as they could easily see the bones under the thin body of the Nilkanth. The body of the Nilkanth was very weak but his bright face glittered with the full essence of alluring attraction any one would like to admire.

In the meantime Shree Sukhanand Swami from the nearby Asharam Had come to fetch water and he was very much impressed with the bright and  alluring personality  over the young yogi who he thought to be from out of the state. The Brightness over the face of Varni revealed him to be the person of par Excellence. Sukhanand Swami had never come in touch with such an attractive and very smart young yogi sofar.  He was attarcted towards the lord as he iron bar would be attracted towards the powerful magnet.

Sukhanand Swami asked to Nilkanth about His Whereabouts, Pasents, Caste and Belief and he invited Lord Nilkanth to accompany him to his to his Ashram where the prominet saint Shree Muktanad Swami. He talked about his guru Shree Ramanand Swami who at present was in Bhuj-Katch and there were fifty Saints in the Ashram at present under the guidance of Shree Mukatanand Swami, a very dedicated Saint and the assistant of guru Ramanand Swami.

Lord Varni come to the Ashram where the Leaders Muktanand Swami Welcomed him very warmly. Nilkanth accepted his offer to stay there with them until the time of the arrival of their Guru Ramanand Swami.

Shree Muktanand Swami Named Lord as Sarjudas. Lord took Over the lord as Sarjudas s.Lord took over the work of fetching water from the nearby well to bring firewood, to bring the dung and to serve the visitors and clean their vessels. Everyone was very happy to see the hard work done by sarjudas.

Srjudas wished to go abd meet Shrre Ramanand Swami in Bhuj. Muktanand Swami Advised the Srjudas to wait a guru was supposed to return soon from his mission of kutch. He thought it was wise to write him a letter and make sure abhout his arrival.

Mayaram Bhatt took nearby seven days to reach Bhuj by foot and handled over the lettars personaly to Guru who at that very time was talking about the arrival of the Lord form UP to take over from him. Ramanand Swami spoke out to the gathering. "As I was telling you that I am the drum beater, but main Actor of the religious Drama will soon arrive and here comes the message of his arrival."

Varni was very happy and delighted to read the blessing letter from Guru and Started obeying his orders from the immediate effect. He started yoga Classesin the Asharam.

There was a small window between the kitchen of the Asharam and the neighbours Barber that was to pass the coals and the fire for cooking. Varni made it closed, as it was not right way of the stay of the saints who had vowed to stay away from the Women. Folk and even the householders.

Them there was a path, which was passing from the front of the Asharam Hall, which disturbed the meditation and even the mental worship of the saints, Again the saints were not supposed to allow the women folk in their compound unless emergency. The path was closed also.

During the reading and listening session men and women were sitting together even during the Aarti and other religious functions in the Asharam.

Varni did not think to be in order. Separate sitting arrangements for men and women were done. The women folk were kept far from the saints and talking and touching of women for sadhus came to and end.

Muktanand Swami was very much pleased with the new restrictions brought to order b Sarjudas.