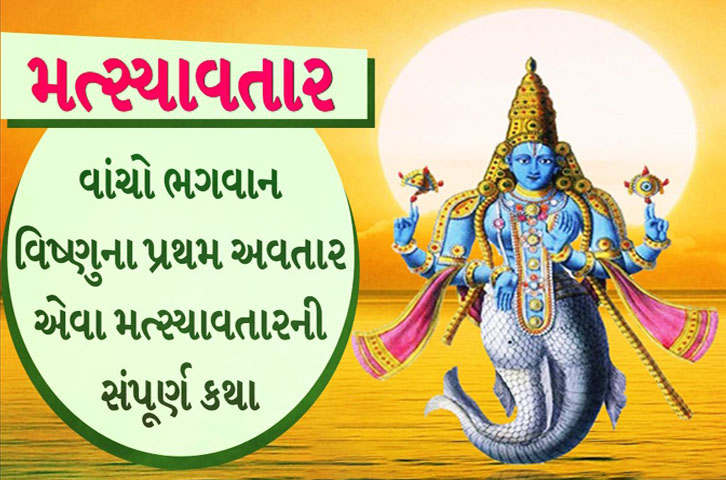 By taking incarnation in the form of fish Lord Vishnu asked a sage to collect all kinds of insects and the earth was submerged in water. In the fateful night, Lord Vishnu protected the boat of Rishi. After this, Brahma ji created life again

Once the Brahmas inadequacy was stolen, the name of the deity was Hygrave. Due to the stolen of the Vedas, the knowledge has become extinct !!! The darkness of ignorance spread all over and the sin and disgrace became unbearable.

Lord Vishnu took fishery as a fisherman for the protection of religion and killed Hidayat and saved the Vedas !!!!

Prior to Kalantan, a Pinyatma king was making a penance. Rajs name was Satyavrat. Satyavrat was in the priesthood only, but at the same time it was also a generous heart. It was a time of sunrise. Satyavrat Kirtamala was bathing in the river.

After bathing and after that, he took a bath in the homage for the purpose. There was an ocean of water, as well as a fish. Satyavrat left the fish in the river water

"Rajan  The big creatures of the water kill me small creatures. Of course, no big life will eat me too. Please protect my progeny .

There is a lot of trouble in me. I have removed the fish from the bowel and placed it in a water filled vessel. Ahaia is also the body of the fish in the night, so much so that the quantity of food has increased so that it can also shrink the place to stay !!!!

The next day, the fish spoke again to the truth -

"Rajan should be managed in another place for me to stay. For the sake of eating, I now have less time to stay." Satyavrat then caught hold of the fish and put it in a lake. The lake also fell into the lake. After this Satyavrat passed the fish in the river. And then he threw it into the sea.

Surprisingly, the fishs body grew so much in the ocean that even the ocean began to fall short for the fish. The fish again said to the truth. "Rajan ... this sea is not suitable for my living. Good !!! "

Now, Satyavrat got overwhelmed. Saatvrat did not see any such big fish anywhere. Who said, My intellect is immersed in the sea?

It is possible to say that you are absolutely paramatma in your body, without any hesitation, keeping in mind the speed that goes on increasing every day. If this is true, please show that you have assumed the form of a fisherman "

The fisherman said, "Rajan ...... .. has stolen the Vedas." The world has ignorance and darkness in all four directions. I have taken fishery to kill Hygriveda. From today onwards, the earth will return to the cycle of the Earth, the sea Its going to be overwhelming. The whole world will be submerged in the water !!

You will not be able to get rid of any other thing. You will get a booze. If you take all the grains and other medicines together, sit in the boat with the sages. I will reappear at that time and will give you the knowledge of the truth !!!

Satyavrat started from the same day to recite Shree Hari and look at the flames. On the seventh day the scene of the spleen has appeared. The sea also flows out of its surface. It is about to be seen as rainy. Water has become water on the entire earth. Once the whole earth becomes watery. Once a navel appeared. They also took seeds of cereals and medicines.

"O Lord, you are the creator of the creation, you are our guardian and your protector. Please take us to your refuge by mercy. Save us. On the prayer of the holy and holy Rishis, the festive God was pleased. He gave Satyavrat with self-realization as per his promise. He showed "

In every animal I live in the same place. No one is tall or not all the lower animals are the same. The world is mortal. I do not have anything else in the world. The creature shows me life in every way. In the end, Get.

Satyavrats life has been blessed by attaining Self-realization through a fisherman god. After life became silent, the life of the life became silent. After the death of the goddess, the God smashed the Vedra and took away the Vedas from it. Lord Vishnu gave revenge to Brahma.

In this way the Lord took the form of a fisherman and raised the Vedas. But also welfare of the worldly life. God is incarnated from time to time and is well-disposed towards the gentlemen and the monks. Such a fisherman, Lord Vishnu, should give birth to the birth anniversary of Chaitra, on the third day.