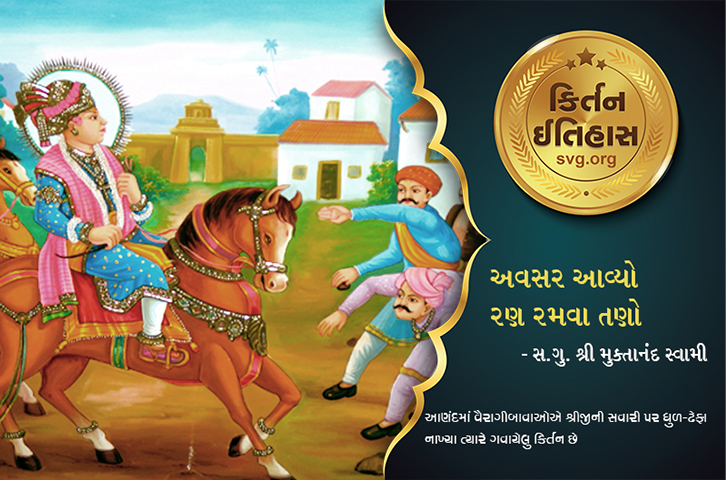 Lord Shree Swaminarayan Mahaprabhuji came to Samarkha village and got rest after coming to the village. The devotees of Anand arrived in the village and came to meet him and the devotees of Dinkar, Harishankar, Brahmin leaders, from them, If this time, we should let the devotees get away with the help of the monks in our Anand. All the lost, frustrated, beaten and hungry Anands banners and teachers were sitting on their feet, that if Sahajanand Swami once laid a foot in Anands market, then he would see how he came out. The monks knew many of them well, so he said in a voice: Maharaj! This time it is not like footing in Anand.

Shreeji Maharaj was shocked at some thought and saw the saints. What is the harmony of the monks and what is the harm? After seeing the Saints in a moment, Shreeji Maharaj looked at Brahmins and said: If you insist on this, then do Brahmins do not get any help? We will be happy to come to Anand and I will eat with love. "Haribhaktas quickly reached Anand and reached to prepare for the preparations for the preparation of the meal and by the time of the pomp, he came to Gondur to raise the village. But they did not know that Lord Swaminarayan had decided to die directly from Goddess Anand.

The rule was that when Shreeji Maharaj was going out of the house, the first Kaliyas, Rajputs and the Shastri Pahras were running behind them, followed by Mr. Hariris humble background, and the monks followed him. At this time, Shriji kept the first monks at the forefront of the others, kept them behind and kept the Dakshakti, Surakha, Aliyakkharta, Hemant Singhji, Jobpanipi and Bhuji etc. behind them. Munimputanand and Brahmanand Muni walked in front of everyone.

From Sarkhej Rosa of Ahmedabad to Rustombagh of Surat, and to the Vardal-Charotra of Tork, the Free Muni spread many satsangs. Anand got a glimpse of Gondi that there was a rift between the bungas and the zonas. The Brahma Muni, listening to the rapture, tartu and bungas, said in the ears of the free person: Swamiji! It does not seem to have any sweet vowels of Samayya. Free Muni was healthy and said to Brahmanand Muni in the ear: Do you worry us? Thousands of hands are behind, they are worried. They say that they took the position.

It was an opportunity to play the desert; It is very priceless;

The mind will meditate on the mind;

It has taken something like this, thats the same with a Gurudev;

That Gurudev is the Taheri Corps, even if the arithmetic wakes up to nine Mercury - 3

Rama will be working hard, guruttani will go to Govind;

Muktanand is in the word, there is no doubt that Jihad will avoid mood - 4

And all the monks walked ahead of him. Shrihari remained silent, running a smiling man. Suddenly, dirt and brick muds began to fall on the monks with such gimmicks, Mawdi. As well as the mud and dark spell of rain also started.

Dadubhakta, Sankrantratha and Jobpanji swords, Dhanush stretched - Today, Kathi, who have no sons to go back to living, cried loudly. Shreeji Maharaj had fought on Kankaria, so this time, he would fight against the transgressors. Understand that when Rajputs proceeded, Shreeji Maharaj heard a loud voice saying: Awakening! Whoever raises a sword is not ours.

It will go out of our satsang. All stopped completely, but the beauty and other Kshatriyas, who started shouting with swords on their teeth and scurrying with teeth, proudly feared to see the taxpayers. Shreeji Maharaj once again shouted: It is not ours, it is not ours. The red-eyed rugs of the anger started to chase after Shriji. The dirt-mud-dirt-intensity marshal was started from four quarters and Shriharri started moving ahead to keep the free radical position of Kirtan, but he continued to move forward.

Dry, clay and vapor, Muktanandji, Bahramandanji, Gopalanandji, Nityanandji, Adi Sants and devotees like Dakshakti, Surakhsar, Kathiya and Jobpanipi, and all the saints and devotees were swallowed by dust-mud slurry. Brick-and-pecker marks started to shine. Surakhachar ran towards Shrihari and took the wrath of the suppressed, satya voice said, Maharaj! What! Our loss of rupee rupees has now fallen to half a rupee. Shreeji Maharaj smiled slow down on his body and said, No food, your loss has increased from Rs. 100 to Rs. 100 / - as high as Rs.

Proceed to worship Do not speak anything, do not stop anywhere. The people of the shops, shops and houses were closed by the tragedy. The dust, the mud and the densities were getting more and more, and with strict orders of Shreeji Maharaj, all the monks who were humiliated - the devotees were moving forward without any resistance from worshiping. Surprise was the surprise that the horses of Haribhas were silent on the back of their moods. Take out the monks, Shrihari went out of Anand as soon as they entered through the market. The sloganeers of the slaves went to the bottom.

Dust-brick haircuters started shaking. Anands devotees went to the house of the goddess of shame. Why did not God show this to God at this time? Why did you keep yourself drenched in dust? Everyone was amazed at it. Harikrishna Maharaj made his devotees and especially the monks