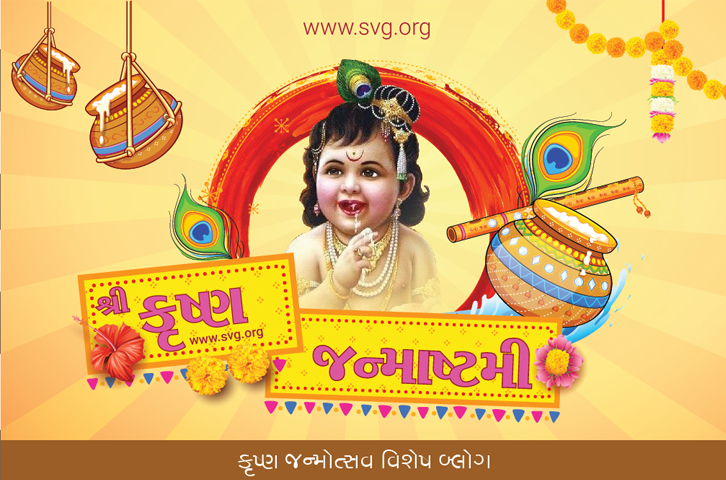 Janmashtami is considered to be the most important festival among festivals in the holy month of Shravan. Janmashtami is celebrated as Lord Krishnas birthday.

On the eighth day of Shravan, on the eighth day, Puran Purushottam Bhagwan Hari Vishnu took Krishna as his eighth incarnation for the purpose of removing the darkness created in the universe, which we celebrate like Krishna birthdays, Gokulastami and Janmashtami. Janmashtami is celebrated with great fanatics in the country and abroad. A large crowd of devotees rises in the Lords view of Lord Krishnas sacred shrines like Gokul, Mathura, Dwarka, Dakor. Everyone celebrates the birthday of the lawful couple.

If we talk about Krishnas birth, God was born in the prison. According to mythology, when Mathura Naresh Kans goes after her sister Devkis marriage, it is said that the eighth child of the goddess will cause Kansas death. After this prophecy, he was scared to get his sister Devaki and Bapu Vasudev in jail. One after another destroyed seven children. God was born as the eighth child of Devaki at 12 oclock in the night and spread the light everywhere. God presented Vasudev to him and told him to bring Nandraj in his house and said that Lord Vasudev was kept in a gauntlet during the terrible rain. In the morning, the entire Gokhalwas started celebrating Nandrajs birth anniversary in the happiness of his birth, and the whole story of Nand Ghare Anand Bhayo got knocked down. In this way God was born in the prison and grew up in the house of Nandraj in Gokul, mother Yashodas kokh.

Janmashtami is celebrated with full faith and devotional enthusiasm. The festivals are full of horoscope on the day of Janmashtami. Among the folk musicians of our country and culture, Janmashtami fairs have special significance. During the Janmashtami, other festivals and Thanagnata are found in the presence of people.

Such devotional sounds create joy and enthusiasm in the atmosphere. Fasting is also very important on this day. Everywhere in the village or in the city, people are seen in this festival of Krishna Janmotsav. Krishna temples are decorated and on the eve of Dahan Handi programs and Rath Yatra also take place. During the Dahi Handi, there is a tradition of throwing a bowl through the childrens law, in which people take part in euphoria and enthusiasm. Dry hand sticks are organized everywhere from small rugs to big cities in the country.

It is believed that Lord Krishnas birth day is celebrated with Krishna Kanyeya Lali Jai Jayoghosh at 12 oclock at night and Thakorji is honored with puran. Hindalas are also decorated in different ways of God.

At the time of Lord Krishnas birth, there was a great deal of sin and sin on the earth. To destroy the demons and to establish religion, Shri Hari himself appeared on earth. God destroyed religion by establishing religion on earth, protecting cows, Brahmins and sadhu saints and fulfilling his purpose. Shri Krishna was fulfilled and fulfilled by all the arts on this earth. These incarnations of God are considered complete. Whatever he has done is sung everywhere as important functions in history.

The life of Shri Krishna God is a message. Their teachings in the Gita provide the true direction of living life. He used all the samadham-penalties for fulfilling his purpose to destroy all the sinners from the earth. The green lamps made by Lord Krishna are immense. When this universe is covered with darkness, there is an atmosphere of depression everywhere, the rain of breakage breaks down, and the black clouds of grief are covered when God Himself is born. In the Gita, Lord Krishna said to Arjuna, "I am incarnated at the time of the birth of Dharma and when there is a great conquest of religion,"

Often, this religion is a glamorous India.