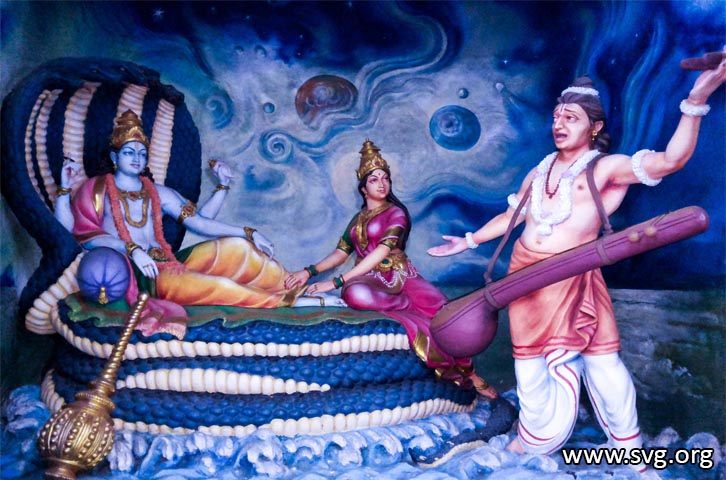 There was one Mahatma. His name was Naradji. Everybody knew him. The name itself reminds one of a Sadhu with Vina in his hand and chanting ‘Narayan, Narayan’. There was another Mahatma and his name was Tumbaru Rishi. This Tumbaru Rishi was very learned in Music.

At this Naradji became jealous of Tumbaru Rishi and naradji thought about it and   started working hard to learn the art of singing. He learnt the art to some extent and he immediately went to Bhagwan and started singing. But Bhagwan responded that Naradji did not sing so beautifully as Tumbaru Rishi.

Now Naradji was confused as what to do ? He performed severe Tapa of Bhagwan Shivji. Bhagwan Shivji became pleased with Tapascharya of Naradji and blessed him with the boon of ability to learn the art of singing and music like Tumbaru Rishi. Naradji again worked hard and learned the art after great efforts and practice.

Again went to Vaikunth and started singing in front of Narayan Bhagwan. But Bhagwan was yet not happy. Now Naradji was more confused as to what to do to obtain pleasure of Bhagwan? Naradji was very humble so he went to Tumbaru Rishi and ardently requested him to teach him the art and skill of singing and music.

Tumbaru Rishi taught him the skill and art. After learning the art from Tumbaru Rishi, Naradji again went to Vaikunth and started singing and playing music in front of Bhagwan. Now Bhagwan was very much pleased and offered him rich ornaments and Vastras to Naradji.

Now Naradji was satisfied and he left his feeling of jealousy which he had been cherishing against Tumbaru Rishi. By narrating this Katha, Bhagwan Shree Swaminarayan teaches us the essence of the moral of the story that, devotees of Bhagwan should never cherish the feeling of jealousy towards each other.

And if at all one intends to cherish Irshya, it should be like that of Naradji and should inculcate noble qualities like those of Naradji in oneself. (4th Vachanamrit of First Gadhada Chapter).