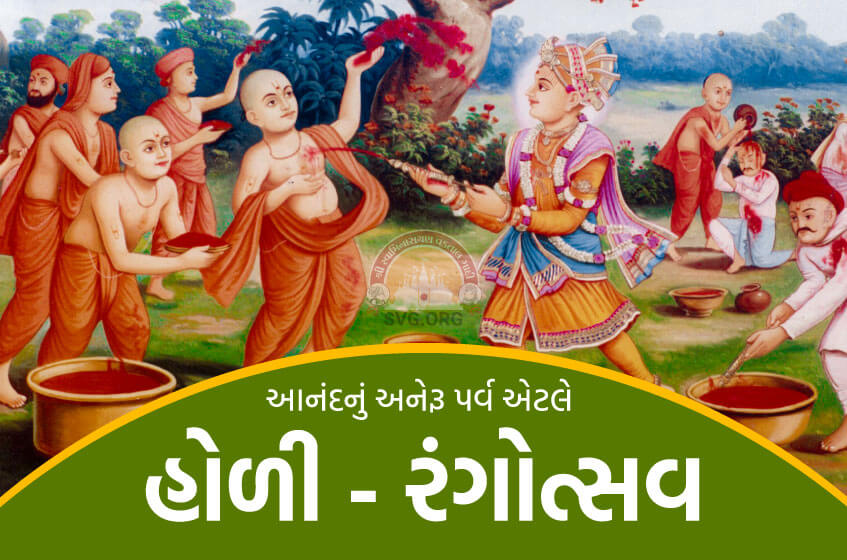 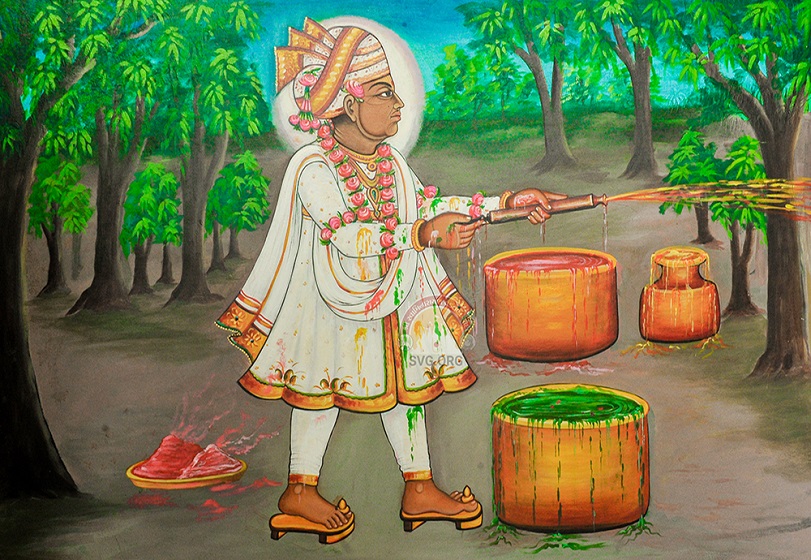 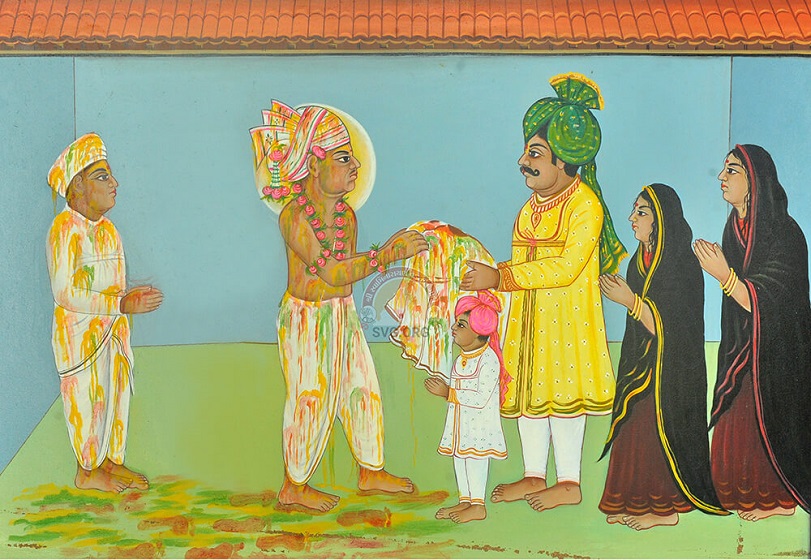 In this mechanical world, a fraction of effort in unburdening life’s tiredness goes to our festivals and celebrations. That is because one feels lively when celebrating festivals. At the same time, divinity of mutual affection amongst people is also lit through festivals. That is why humans are becoming festive lovers with every passing day. Actually, festivals also serve in safeguarding religion. Today, in the foundation of a unified Indian culture, is the invaluable contribution from such festivals. Vrat (Fast), Parva (Fiesta), Tahevar (Festival) are just three different forms of festivals. Vrat teaches humans to live a sober and disciplined life. Parvas being celebrated in masses, it provides emotional unity through Tirthyarta (pilgrimages), stories, fairs, Samaiyas. While Tahevar being paired with corresponding historical-mythological contexts, gives a sense of identity and pride to human beings. Thus, what combines love and prestige in life is a festival. Let us also try to understand the ancient festival of our country called " Holi-Fuldol " from the lively festivals of our society. This festival is also called " Falgunik" as it is celebrated on the day of Fagan Sud Poonam. In fact, the story of Prahladji is told in the seventh skand of Shrimad Bhagwat, in the form of Bhagwan’s Utilila. Utilila means a story of struggle  between good (Prahladji) and evil (Hiranyakashipu). The narrator in this Bhagawat's story is Naradji and the listener is Maharaj Yudhisthir.

According to Puran, Prahlad, son of devil Hiranyakashipu, was a great devotee of Bhagwan.  As we all know, the demon father of Prahlad made many attempts to kill his devotee son. But when he did not  succeed, Hiranyakashipu’s sister Holika was called, because Holika had such a blessing that when she wears a divine scarf that protects from fire, nothing would happen to her even in fire. So, subdued by the insistence of his demon brother, Holika held Bhakt Prahlad in her lap, covered herself with her divine scarf and went into flames. Only then did Bhakt Prahlad's mental remembrance of God became obvious  and he started chanting the name of the Bhagwan loudly. Because the scriptures say -

The sorrow that is considered by humans in this world is not exactly sorrow nor is happiness really happiness. The actual sorrow, however, is to forget the remembrance of God and where there is remembrance of God, there is never sorrow, there is always happiness.That’s very clear. The words from the scriptures are manifested here. As Prahlad was a great Bhakt of Bhagwan and had endless recitation of God’s name without any fears.Strong winds began to blow. Due to the strength of wind, Holika's scarf was blown away and it wrapped around Bhakt Prahlad and eventually Holika burned in fire and Prahladji survived. Thus, the demonic instinct was utterly defeated and the divine power became victorious. Because of the above incident, people since the time of Satyug till present day, light fires in  house , towns, villages, streets and pray to Agni dev to burn the demonic instincts in the form of Vishay Vasna (materialistic desires) and protect a devotee like them. When people came to know that Prahlad survived and Holika was burnt, there was joy everywhere. Simultaneously, by celebrating Rang-Utsav the devotees demonstrated their love for Prahladji which was the day of Fagan Vad - 1 which is today known as 'Dhuleti'. Moreover, on this day, king of Bharatkhand (Indian sub-continent), Bhagwan Shree Narnarayan was born, hence this day is also celebrated as their Pragatiya (manifestation) day all over India. On the same day, in Dwapar yug, Gop-gopis prepared a flower carousel adorned with fresh flowers for Bhagwan Krishna to sit on and Julo (swing). Also, there were celebrations by sprinkling colourful Gulal, so this day has a special place in the Vaishnava - Bhakti sect as "Fuldol Utsav Din".

There is a beautiful story about this festival in Bhavishyottar Puran. Yudhisthir asks Bhagwan Krishna the secret of the festival of Holi. Then Bhagwan Krishna says: “In the kingdom of Raghu Raja in the past, a demoness named Dhandha, who used to kidnap children every evening and thereby it was terrorising people. People begged the king for protection and King Raghu also inquired and found that the demoness had the blessing of Mahadev Shivji that “Dev or Human, weapons or ammunitions will not be able to kill you but, you have a fear of death when children are playing and having fun”. When king Raghu came to know about this, he called all the priests (Purohits) of the state and asked what to do about this? And after discussions the priests said: Let us fix the day of Fagan Sud-15 (Poonam) as a day of joy and laughter for the children from today. A fire was being lit and children had lots of fun on this day. The king made children perform circumnavigation (Parikrama) around fire thereby completing Homa Yagna. So, the torment of the demoness Sundha was removed from the kingdom. Since then, this festival has been considered as a special festival for children. That is why children are made happy by distributing khajur and daliya. This festival marks the arrival of spring. In South India, instead of celebrating Rangotsav on the second day of Holi, it is celebrated on the fifth day (Rangpanchami). But nowadays when this festival comes, men and women everywhere in Rangotsav break the limits, miss restraint (Saiyam Chuki) and obscenity (Ashlilta) arises on this day. At the same time, indecent songs are sung which have caused many distortions in the society and this society has seen remorse consequences. If the power of lust is increased in the spring, it is destroyed by Shivji. Thus, this festival  lists  victory of discipline and is full of deep significance. That is why Sarvopari Bhagwan Shri Swaminarayan has addressed restraint by writing in the Shikshapatri himself: -

Sadguru Shatanand Swami describes this verse in the commentary of Shikshapatri as "Our widow devotee  should not take part in the activities of Holi (putting color Gulaladi on each other)." This festival really gives us a great lesson; Prahladji chanted the name of Bhagwan continuously and fearlessly, so Bhagwan has protected him. The chanting of God's name is very fruitful (Mahima). That is why in the Agni Puran it is written by Lord Vyasji: - ‘जकर जन्म विच्छेद पकारः पापनाशकः | तस्माद्  जप इति प्रोक्तो जन्मपापविनाशकः  ||’ - The meaning of chanting is 'Jakar means you don't have to be born again.' 'Pakar means destruction of sins.' Thus, continuous chanting of Bhagwan’s name is the destructorof every sin of every birth. Therefore, we too take a niyam on the holy day of this festival that we should chant the name of Bhagwan continuously in every action and strive to become a fearless Bhakt like Prahladji. Bhakt Prahlad renounced his father and did not take the side of evil and was hence called a great Bhakt. Being a true Bhakt is no small accomplishment. A saint has said - 'It is easier to be a martyr as it happens in short time; It is very difficult to become a Bhakt as it’s a lifelong struggle’. Thus, Bhagwan will be pleased on us only when we become such true heroic Bhakt that we fight for the truth for our entire life, till our last breath. Just as Prahlad was saved by Bhagwan who manifested from the pillar, Maharaj will be on our side and will make us and the truth eventually victorious.

Thus, this festival was also very dear to Bhagwan Shri Swaminarayan. Maharaj has celebrated this festival many times in Gadhada and Vadtal and has drenched (Bhinjavelu) every dust particle of both these dham with color. Women also played in a separate section created for them thereby maintaining dignity. And Shriji Maharaj teams up with Haribhakts against the team of saints creating two teams while celebrating Holi-Fuldol-Rangotsav with great enthusiasm. Such festivals also established a special kind of Dharma and Maryada (restraint) on the earth. That is why when this festival comes, we should remember Shriji Maharaj and Nandsanto-Haribhakts and celebrate this festival with utmost zeal (Utsah) as well as dignity (Maryada) in order to please them so that we can try to reduce the fatigue (Thaak) of the modern mechanical age (Yantravat).