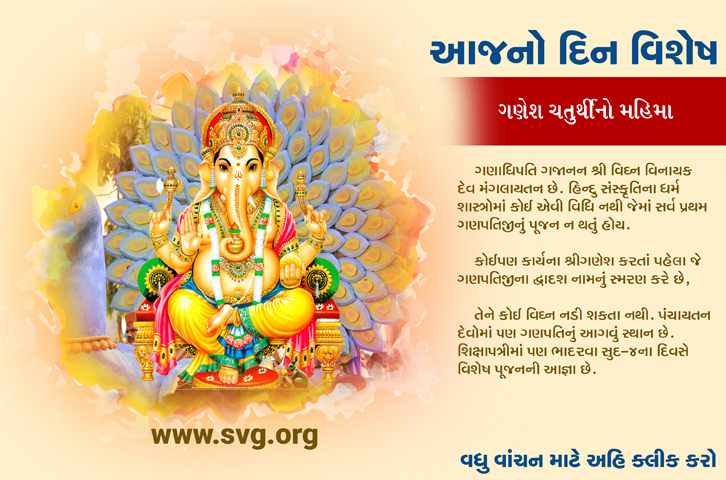 Shiva Bhagwan left his abode on Mt. Kailas in the Himalayas to meditate in a cave. Parvati’s friends suggested that she should have an attendant (gana) of her own because they were not pleased with Shiva’s ganas. Thus, she used her divine powers and bore a son. She named him Vinayak and instructed him to guard their home. When Shiva returned home, Vinayak did not allow him to enter.

After a brief argument, Shiva beheaded Vinayak with his trishul. When Parvati heard about this incident, she cried in despair over the loss of her son. As a means to console Parvati, Shiva sent his men to the forest and instructed them to retrieve the head of the first living creature they met. Shortly, his men returned with the head of a baby elephant. With his divine powers, Shiva placed the baby elephant’s head over his son’s body. In a matter of seconds, Vinayak came back to life. After this incident, Vinayak became known as Gajaanan, which stems from the root word ‘gaj’ meaning elephant.

Shiva blessed him with a boon and explained that people would first offer their love and devotion to Ganeshji before starting any auspicious activity. On Bhadra Sud 4, millions of Hindus in India and abroad take to the streets to celebrate this festival with processions, lively bhajans, and colorful festivities. In the Swaminarayan Sampraday, clay or plaster of paris is applied to the murti of Ganeshji on Ganesh Chaturthi and worshipped for ten days. The murti is submerged into a river or lake on Parivartini, or Jal Jhilani Ekadashi.

On Jal Jhilani Ekadashi, devotees observe nirjala, a waterless fast. Also on this day, traditional prasad items are distributed to devotees, which include chopped cucumbers and ladus (sweet balls of wheat, ghee, and sugar). Five pujas and five aartis are offered. After each aarti, the murti of Ganeshji is placed in a boat which sails around until the last aarti. After the last aarti, the murti of Ganeshji is submerged into the ocean.