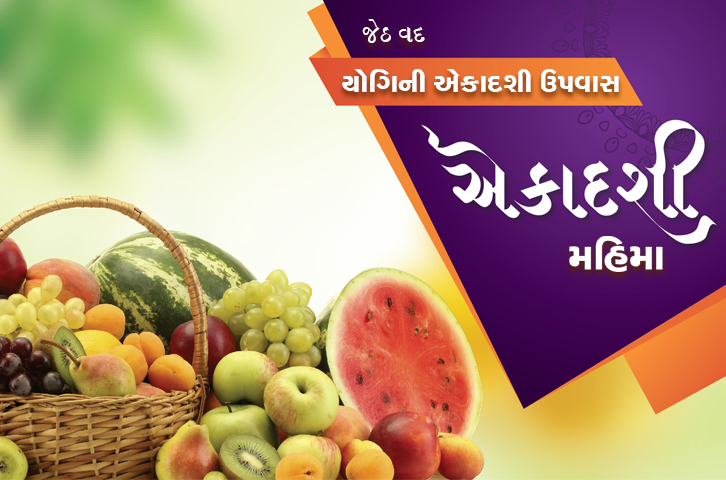 Yudhishthira. Asked: "Vasudev! What is the name of the Ekadashi that comes in the Krishna prakrp of Jetha? ? Describe it. "Mr. Krishna said:" Elegant! Yoginis name is Yogini, the name of Krishnas Ekadashi.

He had an eagle servant named Hammali, who brought flowers for worship. Hemmalis wife was a discoverer. He had been living with his wife for a while in connection with the yaksh workshop. It is destroying big beasts. Samsara is like this eternal boat for the submerged animals in the ocean. "Rajadiraj Kubera of Alakapuri is a devotee of devotion to devout Shiva.

One day Hemmali brought flowers from Mansarovar and stayed in his house and could not go to the Kubers house after being lost in the affection of his wife. Kubera was sitting here in the temple and worshiping Shiva. He waited till flowering till noon. When the time of worship was done, Yaksharaj became envious and said to the servants: Yaksha! Why did not the goddamn hamamali come? "

Yakso said: "Rajan! He is playing with the help of his wife. "After hearing the Kuber, he became angry and immediately called Hemmali. He came and stood in front of a kubber. Kubera spoke to him. "O sinful! Oh evil! O miserable! It has been invented by God. Thus, the leprosy and separation from his beloved will go away from this place and go away. "
Kuber said that it was a fall from that position. The whole body was suffering from the code. But with the influence of Shiva Puja, its memory power did not disappear. Then he went to the top of Merugiri. Tae Muni Mandandeya darshan happened.

Pamakkamy Yakshi worshiped the feet of Muni. Muni Markandeya asked him with a trembling fear. "How did you get the disease of leprosy?" Yaksh said: "Mun! I am Kumbars follower hammalali. I used to give flowers to the Kubera every day from Shishu Puja by bringing flowers from Mansarovar.

One day, because of the happiness of my wifes life, I realized the realization of time, and Raja Kubera cursed me by being miserable. So I fell apart from leprosy and separated from my wife. Hey Munver! The chit of the saints is inherently in love. Knowing it Preach duty to the criminal. "

Markandeya said: "He has spoken the truth. So, I teach you a karmic vow. Vow of Krishnas "Yogi" Ekadashi from the month of May. Your leprosy will be removed from this vow of fullness. "Lord Shri Krishna says:" Rajan! With the teachings of Makandeya, he vowed Yogini Ekadashi. This caused the leprosy of his body to be removed. He was happy to do the chanting of the jata. "

"Rajan! This vritt is so much better that in the eating of eighteen thousand Brahmins, the person who receives the fruit of Yogis Ekadashi is rewarded in the same way. By reading and hearing this greatness, human beings are free from all sins. "