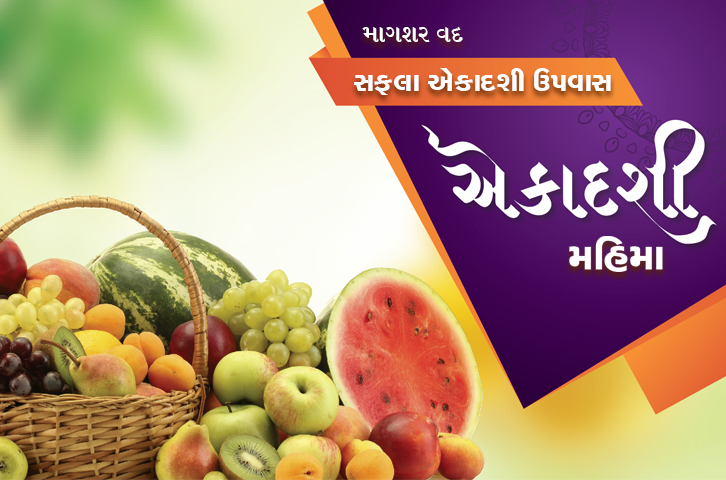 Prahlada Ekadashi pronounces name-mantra, worshiping Shrihari with white, beetle, beech, lemon pomegranate, beautiful amla, cloves, bore, and specially mango and dhupad. Safla Ekadashi is specially about giving a lamp to deepen. At night Vaishnav should be vigilant with men. The vigilant receives the fruit, which can not be obtained by making penance for thousands of years.

The best! Now listen to the well-wisher story of Safla Ekadashi: Rajshree Mahishman had five sons, a famous town named Champnavati before which Raja was the capital of Mahishama. The one who was great in him was always involved in sins. Prestigegam, and Vaishyasak was. He spent his fathers wealth only for his sins. It was always a scourge of misery and Brahmopoos. He always condemned Vaishnavas and deities. After seeing such a sinister son as his son, King Mahashmath named him as prodigy after his father and brothers united and expelled them from the state. Lung has gone into a dense forest. Staying there, he robbed a lot of wealth in the city.

One day when he came to the city to steal the night, the watchman caught him. But when he said that I am the son of King Shishu, the watchmen left him. Then he returned to the forest and started eating meat and fruits and taking life. The place of rest of the vision was with a papilla tree. There was an old cottage tree of many years. The tree was considered to be a great god in the hometown. The sin intellectualism was still there.

One day, due to any accumulated fulfillment, the vow of Ekadashi followed. On the tenth day of the Krishna party of Makshar, the sinner was eating fruit and remained unconscious in the cold night due to lack of clothes. So that time she did not sleep or got rest. It became like a defenseless. Despite sunrise, it did not come to light. On the day of Safla Ekadashi, there was unconsciousness. When he realized that in the afternoon, he got up and went inside the forest stuttering like a lame looking up. He was suffering from hunger and suffering. Rajan! The sunrise was diminished when Luvhak brought many fruits and came to rest. Then, after giving a fruit to a puppy, he made a statement that the fruits of Lord Vishnu are satisfied with Laxmipathy. This is the only way of saying that the poor have complied with this vow.

At that time the skyline became: "Rajan Kumar! You will get the kingdom and son from Prasad of Prapala Ekadashi. He has accepted the blessing by saying, "Very good!" After that, his form became divine and his excellent intellect was taken in the worship of Lord Vishnu. By completing the vows of divine gifts, he attained an independent state and continued to rule for fifteen years. At that time, the grace of Lord Krishna was found in the name of the son of the wise. When the son grew up, he immediately left the states kingdom and handed it over to the state son, and he reached the feet of Lord Krishna, where the human being never went to mourn.