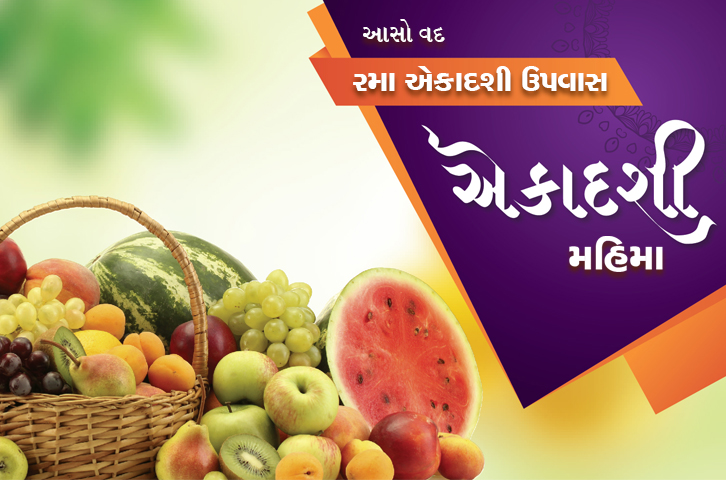 Yudhishthira said: "Please explain to me Mahatmya of Ekadashi Vrata coming in Krishnas party." Lord said: "A great eunuch who destroys the misery, happiness and sins of Rama in Aasos Krishna."

In ancient times, a famous King named Munchkand, who was a devotee of Vishnu and a true saint. The king who is the king of his kingdom, was born as the daughter of "Chandrabhagga", the best in rivers of the state. Raja got married to Shobhan, son of Chandrasena, once Shobhana came to his fathers house on the tenth day. On the same day, the whole town was proclaimed as before, "Do not eat any food on Ekadashi day!" Shobha heard her favorite wife Chandrabhaga: "Dear! Now tell me about what to do at this time. "

Chandrabhaga said: "Swami! My father could not eat any other food, etc. on the day of Ekadashi at home, Prannath! If you eat, you will be very much condemned. With this in mind, strengthen your chit by thinking about it. "Shobhana said:" Dear! Its true to tell you. I will fast today too. It is just like Gods statement. "

Lord Krishna says: Accordingly, after performing the rituals, Shobha followed the rule of Vrata. But as a sunrise, their dead body became dead. Raja Mchkandar performed a Rajnek fire in Shomon. Chandrabhagas also came to live with fathers extravagant karma.

Nourish! Shobhana on the other side! The influence of these vratus has reached the glorious Devpur, situated on the top of the hill of the Mandarachal hill. Then Shauhana started to look like another Kubera. Once upon a time, the famous Brahmin of Mukhkundas Nagarshi went on the occasion of Somsharma Tirthayat, going on the hills of Mandrakal, he found disrespect. They went to him by recognizing the kings son-in-law. When Shobhana saw Brahmins best Som Sharma, he immediately rose from asana and worshiped him. Then he asked his father-in-law, Muchkunds favorite wife Chandrabhaga and the whole towns well-wishers.

Somesharma said: "Rajan! There are all skilled. Its amazing! No one has seen such beautiful and holy city! Tell me, how did you get this town? "

Shobhana said: "Brahman! I have got such a city by giving vow to the name of Ekadashi which is called Raida. I became disgraceful and did this vow so that I believe that this town is not settled, you should call Chandulbhaga, the daughter of Mukhkunda, this annuity. "

After listening to the Shobhana, Somasharma went to the village of Mukchandrapur and told Chandraghaga the whole year. Somsharma Bolaiyu "Good! I have watched your husband. And also observed his beautiful town like Indrapuri. But the town is a temporary one. Make it stable. "

Chandrabhaga said: "Brahmesh! I have a husbands darshan in my mind. You take me there. I will place the town on the basis of my law. "After listening to Chandrabhagya, Somasharma took her along and went to Vamdev Munis ashram near Mandrakal. With the influence of Shakti and Ekadashis vow of Rishi, the body of Chandrabhagya became divine and it attained divine speed.

She then went to her husband. Shobha placed his beloved wife on the throne of her left hand, then Chandrabhaga said her beloved words, "Nath! Im talking about your interest. Listen to this. I will stay till the end of my imagination, from the time I was eight years old till now, and will be rich with all kinds of luxury. "

Accordingly, Chandra Bhagaa, with the vow of Rama Ekadashi, is decorated with Divine Breath, Divya Rupa and Divya Vaishvas, and with her husband she visits the hill at Mandrakal Mountain. Rajan! I have described the land of Rama in front of you, this Ekadashi is completing all kinds of anxiety and like mindedness.