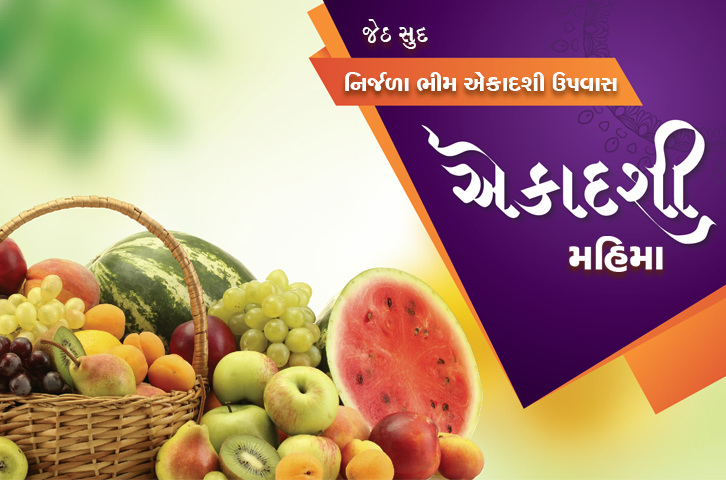 Yudhishthira said: "O Khuhiya beli ...... Dinnath! Jai Ekadashi comes in the month of Shukla party, please give me greatness .. "Shrikrishna said:" Rajan! His greatness Param Dharmatma Vyasji will say. Because they are all philosophers of scriptures and scholars of Vedas-Vedanta. "

Bhimsen said, "God Almighty! Listen to me. Raja Yudhishthira, Mata Kunti, Droopadi, Arjun, Nakul and Sahadev do not eat any food on all these Ekadashi days. And me, they always say the same, "Bhimsen! You do not even eat food on the ekshi day. "But I am the only one who does not suffer from hunger." Bhishaj heard Bhimsens words: "If you want to get the glory of heaven, do not eat food on both sides of Ekadashi."

Bhimsen said: "But father! I am telling you the right thing to say, but once I do not do the vow without eating, then how can I live without fasting? "Fire in the name of" Vrak "in my abdomen is always ruled. So when I am eating too much then it becomes silent. So the Mahamuna! I can do only one fast throughout the year. Tell me one of the vowels that will get the salvation of the heavens and the vow to which I get salvation. I will follow it. "

Vyasji said: "Bhima! In the sixty months, the Sun is in Taurus or in the Mithun zodiac, the Ekadashi which comes in the Shukla party, with a vigorous vow. You can only water in the mouth to rinse or rinse. Other than this, do not throw any kind of water expert in the mouth. Otherwise the vow is broken. This vrat is formed when the human being abandons the water from Sunrise to Sunrise on the second day.

After that, bathing in the pavit days of Dwadashi and donating the holy water and flowers to Brahmins. By completing all these tasks, the Jivanterian man ate a meal with Brahmins. Every year, the number of acadasis comes, and the human being receives all the fruits from the vow of aesthetic one. Lord Keshav, who breathed his last, said, "If the human beings leave everything and come only to my feet and remain untrained on the day of Ekadashi, then all the popes are released."

The man who eats the Ekadashi does not come with a huge black, ferocious and dark-colored fairy-tailed warrior. In the end, father-in-law, gentle-looking, hand-drawn hand in hand, and vanquished Vishnu angels finally take this Vaishnav man to the darshan of Vishnu.

For fasting and worshiping on the day of Nirjad Ekadashi. Male or female! Even if he made terrible sins in horror, all of them are destroyed. The person observes the water rules on this day and becomes pure.

After listening to this, Bhimsen also started vow of this auspicious Ekadashi, since it became known as Pandava Ekadashi or Bhima Eleven.