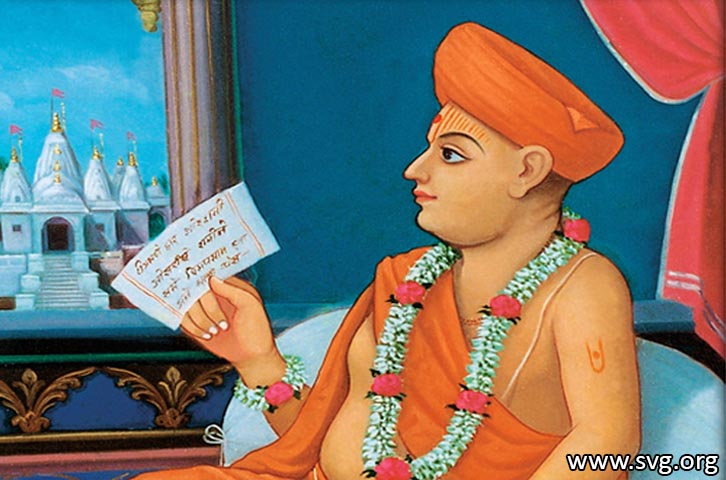 Detail information about Sadguru Brahmanand Swami and his life before accepting Diksha is found in the book entitled “Shri Brahmanand Kavya” written by the poet Maudanji Ratnu and published before 114 years on the pious day of Fagan Sud Poonam Samvant 1958.

With the directions and blessings of H.H. Shri Acharya 1008 Shri Purushottamprasadji Maharaj of Ahmedabad Shree Narnarayandev Desh Gadi and H.H. Shri Acharya 1008 Shri Laxmiprasaddasji Maharaj of Vadtal Shri Laxminarayandev Desh Gadi  It is stated in this Kavi Charitra that in his Purvashram Sadguru Brahmanand Swami was Charan but looking at his Barot surname it is possible that he belonged to Bhaat Caste.

His father was known as Sambhudan Gadhvi Audashia, his mother was Lalba Devi. Both husband and wife cherished utmost respect for the saints and therefore, the said who used to come to the pilgrimage of Abu Mountain range they would be certainly grace the house of this religious husband and wife. Accordingly, once Swami Ramanandji of Uddhav Sampradaya graced the house of Sambhudan Gadhvi who in turn rendered beautiful services and obtained the blessings and pleasure of Shri Ramanand Swami.

Accordingly, on the pious day of Maha Sud Pancham Samvant 1828 a Son was born to Lalba Devi. Later on he was named as Ladudan. Right from the childhood the young Ladudan was expressing his tremendous affection towards Ishwar Bhakti At the age of 15 years Ladudan attended the marriage function of Rana of Udaipur and in the Darbar of Rana Ladudan presented and sang Kavya created by him.

Rana of Udaipur was very much impressed with the sharp intellect and poetic talent of Ladudan and with the permission of his father he was sent to Bhuj in Pingal Pathshala and all the expenses of his studies were borne by Rana of Udaipur. Ladudan studied in this school for 8 years and became master in 14 Vidyas including Pingal Shastra.

Upon completion of the studies Ladudan moved in the States of Jodhpur, Jaipur, Bikaner, Junagadh, Jamnagar and obtained great respect and gifts from the Kings of this Kingdoms. The King Vajesinh of Bhavnagar State and Darbar of Kachchh State also offered gift to the young and erudite Ladudan. Once Bhagwan Swaminarayan graced Bhuj for some days.

People of the city were discussing the miracles of Bhagwan Shri Swaminarayan. Listening to such discussions Kaviraj Ladudan went to perform darshan of Bhagwan Swaminarayan alongwith Sundarji Suthar. At that time Shri Sahjanand Swami was sitting in the Sabha in snow white clothes.

The moment ladudan saw Shreeeji Maharaj, tears of happiness started flowing his eyes and in the ecstatic mood Ladudan started singing self created Pad and he also performed Shodasopchar Poojan of Shri Hari. Thereafter, for some days, Ladudan accompanied Shri Hari in Bhuj and everyday he used to sing new poems and obtained the praise and pleasure of Shri Hari.

Thereafter, Ladudanji returned to his birth place village Khan and received respect and love and affection from his family members and the relatives. He stayed there for some time and after performing pilgrimage of Shetrunjay Mountain range Ladudan came to Palitana where he was honoured by the King.  From Palitana Ladudan came to Gadhpur where he performed Divine Darshan of Bhagwan Swaminarayan.

In Gadhpur Ladudan talked with Sankhya Yogi Motiba (Lalita) about importance of Purnapoorshottam. During the discussion Ladudan was so much impressed with Shri Hari that he took out from his body all his golden ornaments and offered them to Shri Hari and decided to permanently remain in the services of Shri Hari.

While performing Vicharan towards Siddhpur at village Gerita of Dandhya Pradesh of North Gujarat Shri Hari granted Maha Diksha to Ladudan Gadhvi in the year Samvat 1861 and he was renamed as Shri Rangdasji. Thus, the village Gerita is lucky to be the place where the great saint of Shree Swaminarayan Sampradaya was offered Diksha and thereby the important period of life of Swami has been written in golden words at village Gerita of Gujarat State.