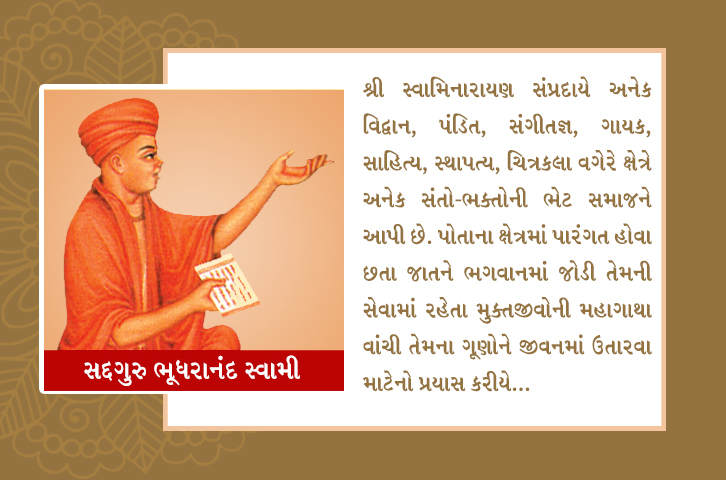 Bhudhranand Swami was born on the Vaisakh Sud-7 at Vikas Samvat 18, in Kesia village near Bansara of twin taluka of Jamnagar district in Hollar. His fathers name was Ramjibhai and mothers name was named Kunwar. They were four brothers. Jivabhai, Ambebhai, Rupjibhai and Panchabhai are our third heroes in the world. They were passionate about sagittish-minded and naturally devotional memories from childhood.

Once upon a time the scholar of the Mahabharata came to the village of Kesia village. From the words of fathers father, Rupajibhai also went to listen to the story. But in the story, the men and women were unknowingly confused, saying to the father what benefit can they get from listening to such stories? Such a story does not remove the mood of the mind. Rajgina, listening to bad thoughts, said, "Ram Swaminarayan" has said that the new religion named Swaminarayan is spreading. It is a very good celebrated religion. As soon as we hear the word "Swaminarayan", just as the cloud is clouded by lightning and the directions in the direction of the river become thorny. As a result, the light of knowledge Jyoti was dissipated in the distance of the Rupjibhai.

After the death of father, Rupaji left Kashiaia at the age of fourteen and went to work in Vaniyas shop in Targhari village. For three years Rupaji did not ask for salary When he went to the salary, Vania had said that he had given pay salaries. Vaniya collected the village with false accusations, and said to the effect of simple nature that, if you wear a belt-chain fire in a fire and you can wear it in a coat, then you are right. Rupaji appreciated Mr. Hariri.

Taking the name of God, the chain worn the neck. Agnidev helped him. All the people hated him for breaking the betrayal of Vaniya and made money for Ruposhi. After that he left the village and went to work in Kutch and went to Ganga Rambhai (Mall). After staying in Kutch for six years, he came back to village Kharva near Wadhwan. There, Dhanraa was a dependent of Sriharri, a charan named Dhanraba, who became the goddess of wealth. Once Dharnaba took him to Gadpoor ​​Samaiya. On the way, Rupaji resolved that if Lord Vajtaji got in the way, he would get a true God! To achieve their resolve, at the same time, Shrihari used to wear heavy heavy costumes and roam at Lakshmibag from the court of Dada Khachar.

Rupaji gave the picture to the picture and said in joy: "Lets see all the lives of the ray", after completing the kirtan, anointed the feet of Lord Ram from his tear water. Then he gave the name Bhudharananda to the Ruposhi brother in the Lakshmi Garden in the same place. But in the end of the citation, the name does not fit the name, because of its name Bhumananda. Swamis poetic power and power were very amazing. So they have created many idols of Lord Vishnu and the glory of the glory of Lord Shiva.

Once Bhumanand Swami went to the village for satsang, there were four days of fasting there. He started to drink them, and dried his mouth. Thakorji, who got wheat poke on the fifth day, took care of love. "Jhamthal jeev wari wari" was said to have been bowing down to Shrihari, where Shrihari gave a glimpse of the things which came in the vow of the Shastri Darshan.

In 1890, Swami was in the basement of the Samastiya of Vasant Panchami. There, Dallapratam heard Darshans arrogance as a bow in his chest by listening to his jugular voice. They are present in the eyes, and they are presently present in the form of Satisfaction. In this way, a strong believer was made. Swamy has written Vashudev Mahatmya Pancham Skanda, Dasham Skand, in scriptures like Vrajbhasha. The Ghanshyamlilamrut Sagar has been a voluntary service of the sect by creating a scripture.

When Swamiji had to renounce his body, he prepared a plane in the village of Mansa and sat in it. He said, "After noon, I am going to the dham. And in 1924, on Sunday, on Sunday, 21st February, after leaving the physical body, went to the shrine of Shri Hari.