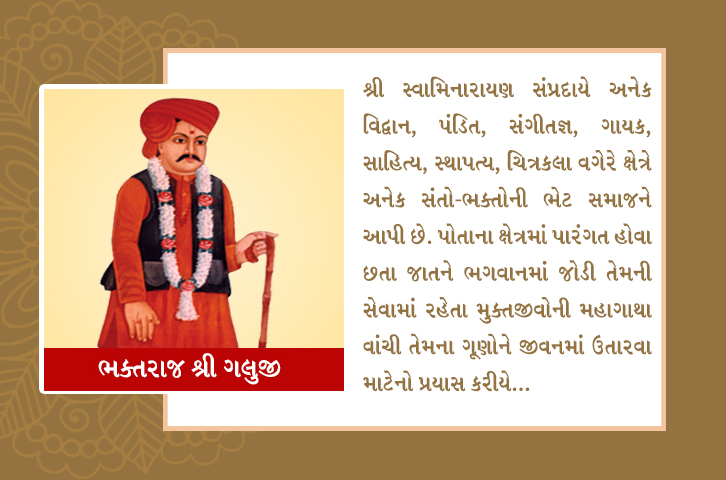 In the third verse of Loya, Swami Shreeji Maharaj, who gave the title of Bhaktraj, with great knowledge, including Mahatmya Gnan, was a native of the village of Duduzar of the Goddess Gulmiji Mahamadabad Taluka. The caste also wanted to be like Brahmin like Lord Brahmin and pleased Lord Shri. Swayam Maharaj could not even pay the value of devotion to his devotion. That is why Srihari kept his daily care.

Once upon a time Swar come and switched the paper. Today Vadathal Maharaj has called it by filling the house in the same house. Guluj took all the luggage into his carriage without thinking anything. When Garasia came to the open Talha for revenge on the old half-night, the elderly mother said that she had gone to the place where Lord Swaminarayan had called the head of the house. All of us have become astonished. This is the real example of Who keeps taming Ram, who gets tasted. In the end, the matter went back by saying their intention and displeasure.

He returned to Guluji the next day. When she came home, she heard tears in her eyes. Once the same Gulaji was performed by Maharaj, his mother took the advantage of satsang, enthroned by Maharaj and enthused by placing it in one of the garments tied to her as a hercules. At last, when Maharaj was leaving, he began to give up after completing the extra work. Guluji says Lord! I am Sutki, Shreehii says that there is a whole world, the devotees are always sacred. Having embraced and ami vision, made the name of Gulujo profoundly memorable.

Vandan in the form of such a rare devotee of the people to abandon the world, to abandon people, and to underestimate the Lord.