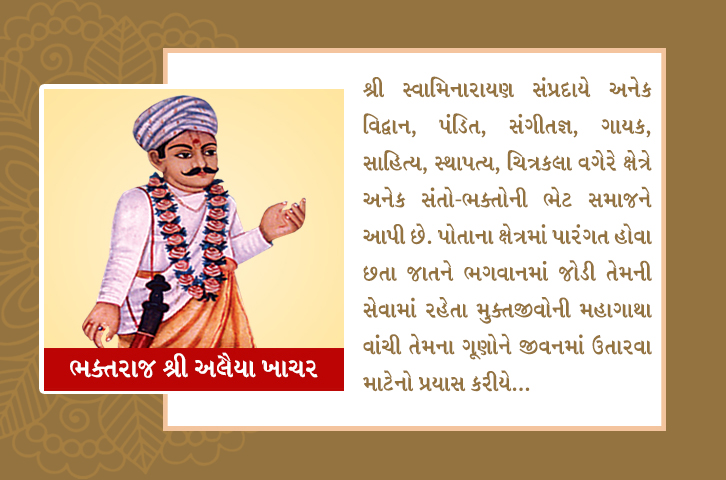 The only Bhaktraj Maharaj who attained the power of Lord Swaminarayan from Shreeharis asylum, like the Dhruvatak in the history of Shri Swaminarayan Sampradaya, and the Kathikudadipak, was the only Nirmal Brahmachari Shree Aliya Khatcher.

This Bhaktrajs hometown was a Zinjavadar, situated about 15 km from Gadhpur, which was celebrating Gyan Dip in the life of many through rational speech with lifelong brahmacharya. It was his fathers devotion and happiness that as a result of his childhood, he succeeded in making his father Samat Khachar, a devotee of Goddess Prakriti.

Alaiya Khaitars talk of spiritual life has brought blessings to many people in the life of devotion. The servant who came to his court and the laborers in the farm also became satsangi. Hey! History says that 18-18 souls dedicated their lives to satsang.

That is why alaiya devchat in the then devotees has been written as a devotee who has given Lord Aishwarya. With twenty parsavas, he went to the countryside and breathed his last in the satsang. Voters are considered Swaminarayans devotee has such strength. Our teachers do not have that.

After doing the festival, give up, give alihaan presents;

By saying, Nishkulanand Swami has taken note of this devotee Aishwarya.

This brave devotee of the faith has easily overcome the difficult trials. He got nothing in the blessing of this aishwarya. Seeing his life, seeing his devotion, Sri Lahiri gave him strength. According to the famous satsang of Satsang, when the Lord ordered 18 villages to become a monk, this Rajput had renounced ragas, ornaments etc. on the way. The rings wrapped in the necklace and tied the knees to the house and made their way towards the renunciation, which was received by the command of Shree Hariri. This is Sahajanandi Brahmtaj.

"The devotee did not say that he was married, he took the vow."

His voice could go on reaching Akshardhham by confining it to his devotion and brahmacharya. Saints say that Swaminarayans dependent goes to Akshardham only. "His uncle challenged the statement of alaiya dhachar. Your partner left the body from the extinction. When you are different, Alaiyakhachar goes into the crematorium and hurts. "The Jihala" 7, which stood out of the wooden rocks and said, "Why did you call me from the dorm"? Then the speeches became negligible. Then again Alaiya made a whim in the cremation ground and put the body in front of the house.

Such a devotee also had the honor of reverence, he had left at the time of satsang, but he had devoted his devotion, so at the end, he got mixed up in the form of free of character. Blessed is such a devotee ..