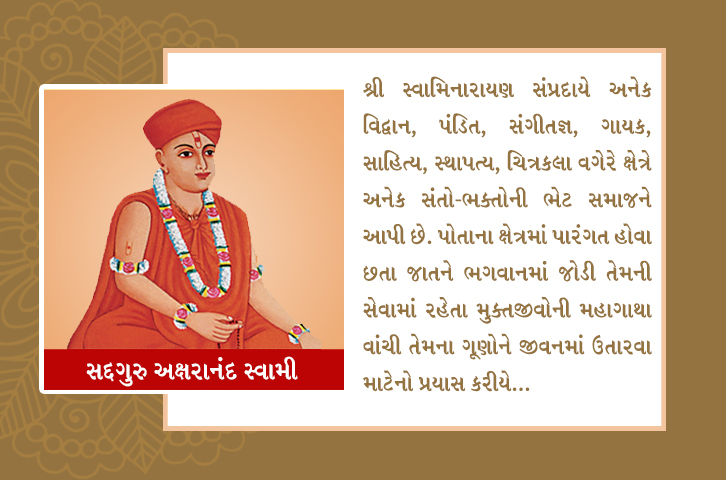 Anand Laxman, who was an experienced patron of spiritual science, was worshiped in Albela and worshiped Aksharanand Swamis prenatal name. They were from the village of "Aliya-Moda". From his childhood, he had a lot of love for Paramat and he was a true devotee. Once upon a time when the saints went to Alaiya-Moda, the Rajputs of Pujya and Duluji saw the seeds of liberation by seeing the words and behavior of the saints. Pure and Dala brothers, both of whom were created by the inauspicious attack of Shias, were made with green threads, with Sree Harvar. So woke up to meet them.

Shreeji Maharaj was sitting in the room chamber in Gadhpur, where he accompanied the saints to visit the princes Maharaj. There, Lord Swaminarayan said to the grandfather, "O saints! The prince has brought him to teach Paramahansa to initiate. Both of these prince have sagged. Having said this, both brothers worshiped Dasa and initiated a normal diksha.

Mahabaj pujajatis saints life began to flush his life, and Maharaj gave him the name Vaishnavi, "Shantanand Swami", he named it Shubhak Nutan, and at that time, he was sitting in Shadhi, in the Akshardhda, on the divine throne, Rajri ji Rajarajeshwar Paramat was occupied by Shrihari. It became a manifestation of the form. The form of the earth and the Akshardhamastha forms are the same. There is no difference in it, it becomes a firm determination.

When Duluji offered one hundred goldmahrs and shield sword to Lord, then Lord said: "Your sibling has been a saint to teach mankind. You have to live in the service of life saints, who have saintly qualities. Daluji shrived Shreeji Maharajs command.

As Shantanand Swami Vivekanak was skilled and expert, Shree Lahiri made him the chief of Vartal. Swami also did good service to the Vartal Temple according to Sriharivis Agnas. Despite being a Swami Mahant, "if you get a low tale, if you get a lot less, if you have a big fortune," then serve according to the row. He was able to get rid of the distance between the possibility of small saints and devotees. Swamiji lives forever in the Varanasi. In 1919, after leaving the physical body, Swamiji had a narrow gap in his life. His prayer was performed in the premises of Gopalanand Swami and Nityanand Swami.

Swaraj: Vandan in Charanvarind of Sadguru Shashtanand Swami, who favored Satsang Samaj in the service of the temple made by Sriharri.