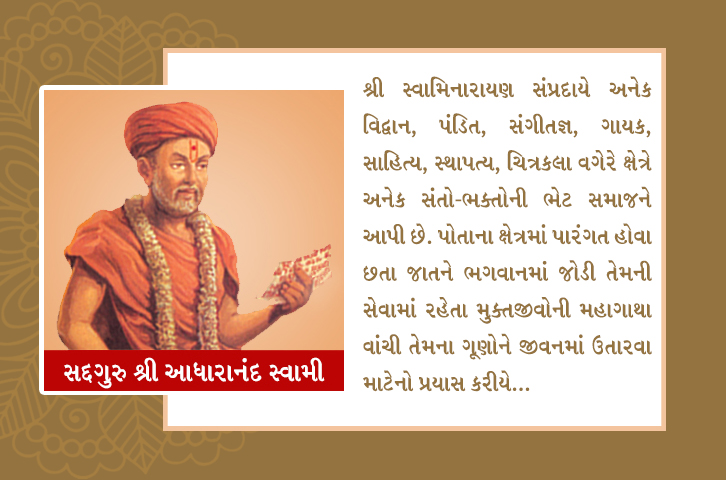 Shree Swaminarayan, the only painter in the field of Sri Ram Swaminarayan God, was a master of the painting, Mahabharata, the author of the book "Shree Hari Charitra dead sea", and a prominent place in the Ashtakavi, was the chief disciple and lohia of Sadguru Shree Sahanand Swami Sadguru Shree Muktanand Swami.

Swamishri was born at the village of Khodriad, in the house of the Gurjar Sultan caste, "Hansrajbhai". Childhood name was Veerji. The color of satsang has spread to the limbs of the family. The devotional spirit of the holy house of God like the Ashram of Rishi Muni has a profound effect in the life of Veerji. Veerji, who reached the threshold of youth, asked for his mother not to be a bride, but for Harrywar, she asked for the transfer of immortality. Mother empowered polarization; He inspired the son to walk in Gods foot, but the father, Hansraj, was very excited to have a self-sacrificing wife.

Gurudev also explained to Shri Muktanand Swami. At the end, being influenced by the Vairagya concept of Viraaj, Swami commanded Hansraj to stay in the home of the house and Birji got the leave to become a monk. Swami Maharaj took both the father and son to Swami Maharaj and when he told all the facts, Shrihari was very pleased and embraced both. According to Muktanand Swamis decision, Hariyi initiated Veerji and named him as Basantanand Swami. Swamijis second name was "Siddhanand Swami", because Swami himself was a poet, so that the name of Kirtans did not remain closed.

Sadguru Shree Saharanpur Swami is a Gurjar Surat, and he has inherited the skill of craftsmanship. Swami was the only painter saint of the sect. Making idols of small, large, simple or golden colorful Shreeji Maharaj. Many saints still found near to this day. Along with the painter, the Swami was also a unique loin. Swamy has obtained the title of Muktanand Swamis right hand and has played a bashful pen.

Along with drawing and writing, Swamy was also well-versed in architecture. Under the supervision of Swaminarayan, the temple was constructed under the guidance of Swaminarayan. The biggest work of Swamis life is the formation of a huge "Sree Birichi Ramaat Sagar" like Mahabharata. Swami started this granth composition at the age of 58 years. During three years and three months 97,389 Doha, Chapaio, 309 wave and 8 floods have been created, but the grant has remained incomplete. This granth has been respected in both countries as a diary of the lives of Sriharri.

Thus, the life of Saharanamband Swaminarayan is the unique worshiper of Srihari, the servant of Muktanand Swami and the Liyiah, a saintly painter of the cult, has been passed as the author of the biggest treatise in the Hindi literature world.

In the year 1919, Acharya Shree Raghuveerji Maharaj had given the throne to Lord Lakhwatprasadji Maharaj, and in the meeting there, Swamis presence was recorded in Vikram Samvat 1919. There is no mention of when Swami took the umbrella of his presence from this satsang. The story of the Swaminarayan in the story book is documented till 1928.

The only known knower of the painting of the Sampradaya, Katti Vatiya, in the footstep of Saint Shree Sahanand Swami.