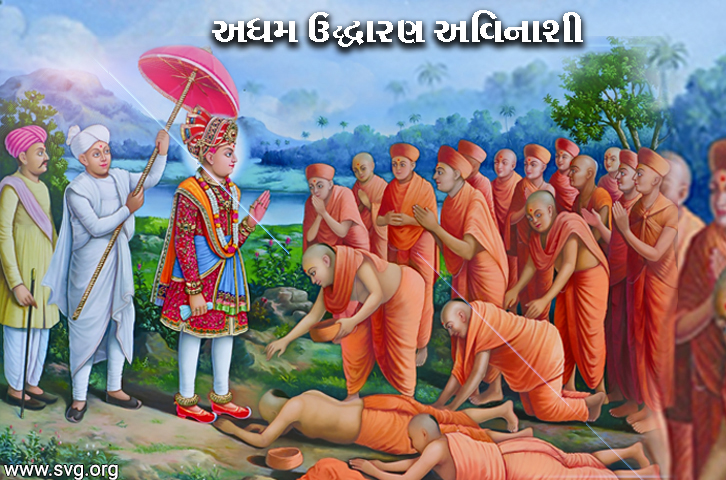 Do not leave greedy knot, reckless tech your ray. Tech

Bhoodarji has filled you with Madi in my meeting,

Call the child in the right place; 1

Even if you like him, your son, a non-sensible egoistic ray,

Be careful that you have stomach; 2

Unless, here, if the planet is unknowingly,

The child is second to the womb, not the worlds benevolent rays, the vile 3

The same request of Brahmanand, the mind thinks,

You have been seen in the

Concerning the roar, the countries of the country appreciate Mind 1

Such a Ray can not know the fault of the people; Mind .2

The sugarcane hit the ground,

No one likes to be strong, so does the mother go on the mail. Mind 3

Catching Survey Maline, one to you,

Lord Brahmanand says the word of the order, the virtue of your guru, the mind. 4

At the end of the second Prabhuti term, the third position was established to be made the Swami. There, Shreeji Maharaj came in front of the Swami with his turban. Swamis cheeks were lily from the end of his scalp. Like a mother, the mother, like a pawn and a cows like a cow, "I love you!" I am your friend.

Swamijis both hands were touching, standing up, clapping with the chest in the bathroom, tears in the eye, and watched Karunanmayan in front of Swamiji. Swami had gone in a lot of bliss and went to the body of Goddess Swaminarayan. Shreeji Maharaj began to fall prey to purification and lovingly absorbed Shreejis feet, and then he sat under the throats, and after giving happiness to two minute silent interests, Shreeji Maharaj said, "Brahmamuni! I used to have this manuscript to show my patience and to show others that my saints are innocent. You are always with me in one form, and I am telling you outside.

Stay here for two days. There we meet all of us. Then Swamiji will go to Garhpur. "Swamiji shook off the silk shawl on his shoulder, and Shreeji disappeared. Swami was healthy, the fountain of joy spread and believed that Maharaj was always pleased with me. After getting the khase real, he took a bathy action after awakening the saints and the saints, and stayed there for two days.

On the third day, Shriji came to Lord Shiva on the march, and Swami sat on a roja horse and came to Gadpur. Babar darshan of Baba Vishnamand Swami in the morning in the morning, Shreeji talked to Sadguru Shri Nityanand Swami, who said, "Lord Brahma Muni has made a lot of good on the night last night, Keeping a list of these things, when Maharaj went to Gadhde and the next day Lakshmib When Ghani plenum birajya nityanandasvamie Satguru Maharaj urged to listen to prabhatiam,

So Maharaj ordered the Sadguru Shree Brahmanand Swami to speak two Prabhati words made in Ganga, and Swamiji gave these two positions in Sitar, therefore, Maharaj gave the land of his prasadi to Sadguru Brahmanand Swami and Sadguru Nityanand Swami. After the arrival of Gadhada, Swamiji commanded the creation of the statue of Lord Vishnu on the same day, Murthyavaranan and Listened to eight point of consultation Velam were.