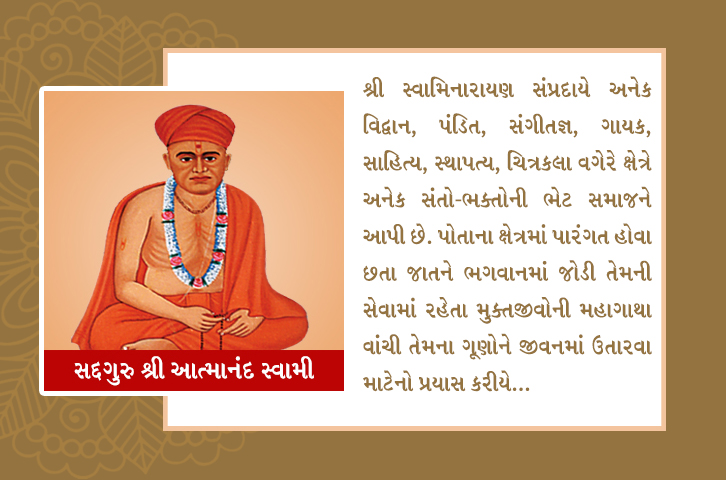 Shri Satmanand Swami was a resident of the "Vaishnaval" village of Marwar region, for 117 years. Their Birth VS In 1799. Practical in childhood The youth twisted the tirth to leave the house with the desire to receive God by trick. He made a pilgrimage of pilgrimage and dedicated to pilgrimage on the feet of Lord Ramaand Swami of Uddwavatar Sadguru. Ramanand Swami was the coincidence of the Puranas of the East. The Swami also gave the name of "Atmanand" by initiating a diamond.

This saintly performance of Sadh Jodhpur, for the first time, was performed by Shriharri. The clouds of joy blossomed in the distance. At the age of 60, this young man of twenty years old dedicated himself as a servant in the command of Sahajanand Swami (Guruji).

His piety is praised by Lord Shree Hari. They also called the promised idol. There is no doubt about this. Once the Maharaj asked in the meeting: Stand up that no one has asked for anything till today. Then one elderly old saint standing on his hand tied up. Nishkulanand Swami has said:

Then Nath says the Saint Shura, who is in complete trouble with this;

It is like this Atmanand, say such thing, Muni Ind.

As a result of religious beliefs, at the age of 90, Maharaj went to Dhalera for the last darshan of Lord Ganesh. There are many divine writings written by Lord Swaminarayan on Satsang. Hey! On the occasion of the Loya Shakotsav, Maharaj showed the decorative rajipo to Swamy and not to the true flowers of praise, and said this like the Atmanand. Nishkulanand Swami writes:

After appealing, she herself, beautifully embroidered decorator

In such a Sight 117 years laid the body. Satsangs immense service. In the Vagad, Lord Swaminarayan set a record for the Akshardhama, which has been linked to life-long on Vikram Samvat 1916 Jeth vad. 6. Then the entire satsang, including the servant Shivlal Sheth, became tired of feeling lost in an elderly saint. Vandan Ho is the place of such a legacy