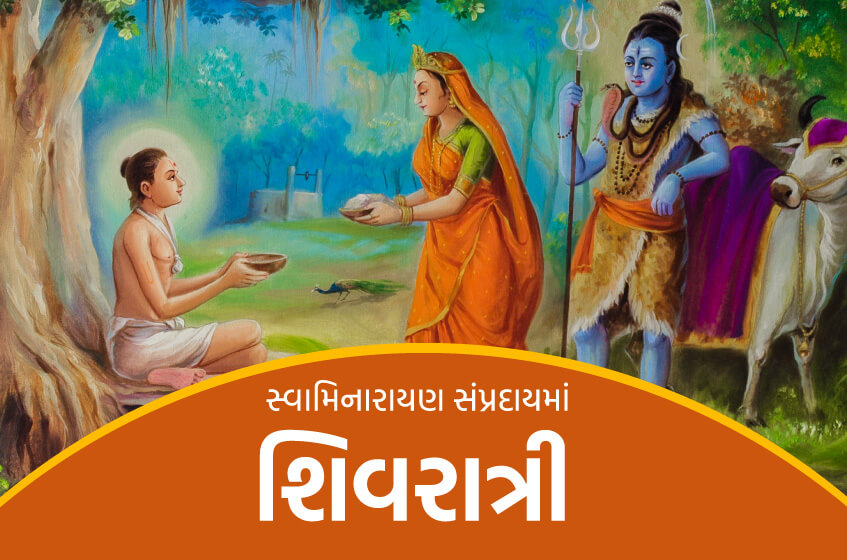 Shivaratri: A festival of joy and exhilaration with devotion and faith Shivratri is a very important festival in the tradition of Hindu Sanatan Sanskriti. As the name suggests, this festival is for worshipping Lord Shiva in particular. When an individual worships Lord Shiva with faith and reverence on this day, Mahadev is specially pleased with him and his wishes are fulfilled through Shiva’s grace.

On the day of Shivratri, devotees visit Shivalay and worship Shivaji in many ways according to their ability. With holy water, milk, Panchamrut etc. objects are used for Abhishek of Lord Shiva. Moreover, Shivaji is worshipped through special objects such as dhatura flowers, ash, and bilvapatra. On this day fast is also observed. The occasion of Shivratri is not only a religious festival but also a cheered celebration for the whole society. On this day the major pilgrimages of Mahadev or renowned Shiva temples are full of events like Bhakti or Santvani (Spiritual Talk) or Lok Mela

Bhagwan Shree Swaminarayan has commanded his devotees to worship, darshan, and fasting for the grandeur of Lord Shiva.

In the doctrine of Swaminarayan Sampraday, noblest scripture Shrimad Satsangijivan describes in section IV, chapter 59 that Shree Hari himself commands to celebrate the festival of Shivratri in the following way

Shivaratri in association with Puran based stories:

Although the story is quite long, the synopsis is as follows. In a forest, a hunter was sitting atop a bilva tree in search of his prey. To pass his time he plucked the tree leaves and threw them on the ground but he had no idea that the beneath dust and dried leaves is a Shivling and whatever leaves he was throwing on the ground were actually a means of worship of the Shivling. In the wait of his prey, the entire day of Hunter was spent. First, second and third quarters of the night passed but his plucking the leaves and throwing them down did not stop. The same activity followed in the fourth quarter as well and as soon as the fourth quarter of night was over, Shivji was pleased, gave him darshan, and blessed him saying "In your next birth you will be known by the name of Nishaad and you’ll have the opportunity to serve Bhagwan Shree Ram''

Ghanshyam Maharaj used to sit for a long time in Shivalaya In his childhood. Moreover, when Bhagwan was doing vanvicharan in the form of Nilkanth Varni, once he was forced to have many days of fasting and he only got water in his journey, Shiva and Parvati came forward and provided him with food (Shathvo). Then Shreeji Maharaj instilled Lord Shiva in the form of Sidheswar Mahadev at Junagadh Temple to have a Upasna marg of worship and also where there are magnificent Swaminarayan sect temples, there resides lord shiva in the form of shivling and all saints and devotees devotedly worship Lord Shiva.